5 Myths About Linux That Scares Away New Users 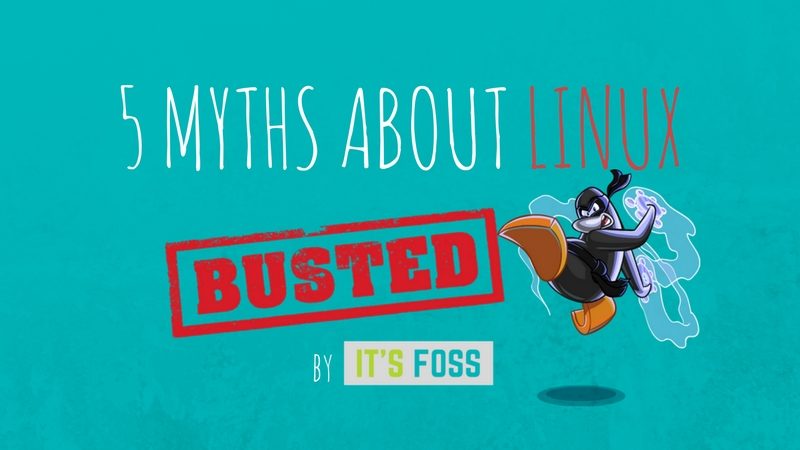 Are there really myths about Linux? I mean there are plenty of facts about Linux and how powerful and secure it is that the entire tech world is relying on it.

Yes, the world relies on Linux to power its technologies but we are not talking about the ‘industrial Linux’. We are talking the desktop Linux. The Linux that a normal user should be using as its daily driver for surfing web, for document editing, listening to music and casual gaming.

When it comes to the desktop version, there are actually some famous myths about Linux and if one believes them, he/she will be very reluctant to use Linux.

5 myths about Linux that you shouldn’t believe

In this article, I will bust these myths about Linux. I am not going to trick you in switching to Linux by lying, I’ll counter these rumors with facts, the best way to do it.

Myth 1: Linux is very difficult to use

If you think Linux is difficult to use, let me ask you this. When you used a computer for the very first time, how did you feel?

The answer would be that you just didn’t know how to navigate or use the operating system (Windows, I presume). Creating new files, installing software, troubleshooting issues, everything seems complicated at beginning. But did you quit it at that point?

No, you kept using it and gradually, you get comfortable with it. Linux is no different. Things might seem a little complicated in the beginning but give it enough time before being judgemental.

Still not convinced? Okay! You do know that Apple’s macOS is a popular desktop operating system. But have you ever tried to use macOS?

macOS is as much confusing in the beginning as Linux. You will have a hard time figuring out how to navigate to files, folders. Installing new software in macOS is another challenge when you just don’t know how to do it.

Linux is no different. Perhaps it gives so many options that it overwhelms a newcomer but this doesn’t mean it is difficult to use Linux.

Myth 2: You need to know commands to use Linux

This is another myth that scares a new user. Using command line for an operating system? That could be a nightmare for many.

Linux has a powerful command line interface, there is no doubt about it. In fact, you can use Linux entirely in the command line.

But this is not what you have to do while using desktop Linux. If you know a few commands, it will help you troubleshoot issues you may encounter (like in any other operating system). But you don’t have to know commands or become a command line ninja for that.

Most beginner friendly Linux distributions provide a complete graphical interface. You might never need to use the command line.

At worst, if you find some issue or if you are trying to install software in Linux, you might come across commands suggested by people on the internet.

Using those commands is very simple. Open a terminal and copy-paste the commands.

However, basic knowledge of Linux commands will help you at this point to avoid using dangerous Linux commands that might harm your system. Linux command line is like a very sharp knife. You can do wonder with it but you can also cut yourself. It depends on how you handle the knife.

To sum it up, use a Windows like Linux distribution that will have almost no requirement to use the command line.

Myth 3: Linux does not have enough applications

At times, you might not find your favorite application in Linux, but there might already be a Linux alternative application. It is no different than macOS where you won’t find all the Windows applications but you still have some alternatives.

You also have the option to run Windows software in Linux using Wine program. What else do you want?

Myth 4: Linux is not for gamers

This myth holds some water if you are a hardcore gamer. But for casual gamers, Linux still have a comfortable range of games.

Gaming on Linux has improved considerably in the last couple of years. There are dedicated Linux distributions for gaming. Dell’s gaming range Alienware has Ubuntu variants available.

Popular gaming distribution platform Steam has over 3000 Linux games. Steam believed in Linux so much that it created its own gaming console running on Linux.

In addition to that, there are some companies that bring popular PC games to Linux. Take a look at the best Linux games of last year. You’ll get games like Mad Max, Lara Croft, Hitman etc. These premium games might not be available at the same time as Windows, but sooner or later you get to play some of them, if not all.

There are websites and stores where you download Linux games, both free and premium ones.

Oh! I would also like to mention that you can play arcade games in Linux terminal. How cool is that!

Myth 5: Linux is for servers, not for regular desktop usage

Linux is an excellent choice for servers, clouds, internet of things or what not. It’s the dominant choice for supercomputers. But it’s not good enough for average computer user? Give me a break!

I consider myself an average computer user. I have been using Linux for last 8 years or so. And what do I use it for? Web surfing, listening to music, watching movies, watching Netflix, do some work on documents and presentations, a little bit of programming etc.

I don’t play games on it because I have the option of Play Station available to me. I don’t do editing work because I don’t like it but I know there are plenty of options for image and video editing work.

You may argue that I am perhaps an expert Linux user (I don’t believe I am) but remember I started using Linux when things were not that rosy but I still continued using it and I have never looked back. What’s your excuse?

I could have argued why Linux is better than Windows but that’s not the point of this article. I strongly believe that Linux can be used for general purpose desktop usage.

Whenever someone says Linux is too difficult to use or it doesn’t have enough options, I bring macOS to the discussion.

People pay thousands of dollars and use macOS despite its limitations but they complain about Linux which is free to use. Linux is not more difficult than macOS. If you can use macOS, you can also use Linux.

As a Windows user, you might find it a little bit overwhelming at the beginning but do give it some time and effort. And yes, stop believing in those Linux myths.