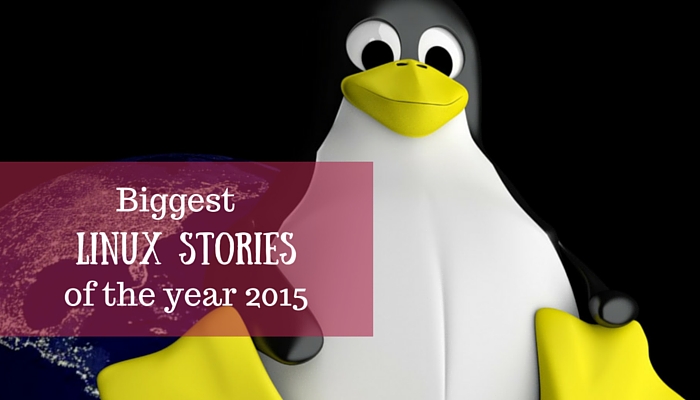 Year 2015 is coming to an end and I am here with Year 2015 special series on It’s FOSS. First in this series is the biggest Linux stories of the year 2015. These stories are the ones that had the most impact on the Linux world, both positive and negative.

I have summarized ten of such stories which created the most buzz in 2015. Here we go!

Biggest Linux and Open Source stories of the year 2015

Just to add, the listed items are not ordered chronologically.

In late September, everyone was shocked to hear that Microsoft created its own Linux distribution. It was later revealed that it was a software developed for its Azur cloud switches.

But the story did not end up just there. Microsoft indeed partnered with Canonical (parent company of Ubuntu Linux) for HDInsight, Microsoft’s big data Hadoop-on-Azure service. Ubuntu was the first Linux on which Microsoft deployed this software.

Will Microsoft continue its affair with Linux? Or will it dump it after Linux has served its purpose (Azur). Only time will tell.

You can follow this tutorial to see how to install Visual Studio Code in Ubuntu.

Apple was not behind in showing off its ‘love’ for Linux and Open Source. Apple’s flagship programming language Swift which is used for making iOS apps, is now open source with Linux ports available. Though in beta, you can easily install Swift in Ubuntu.

But Apple is Apple and it started bragging itself as the “first major computer company to make Open Source development a key part of its software strategy…(sic)”.

Ubuntu Phone was finally launched earlier this year. Intended for early adopters and developers, Ubuntu was welcomed with open heart by the Ubuntu community. Mainstream smartphone users are still shying away from it, mainly because the OS is still under heavy development. Year 2016 will be deciding for the existence of Ubuntu Phone.

Jolla, the company behind Linux based smartphone operating system Sailfish OS, hit a major financial hurdle. It resulted in half of Jolla employees being laid off.

Jolla had a very successful crowdfunding campaign in 2014 for its tablet. Apparently, they spent most of the budget on the development of Sailfish OS and when the lead investor backed off, company struggled for its survival.

Good news is that Jolla has managed to get some solid funding and its back in business.

One of the open source alternatives to Android, Mozilla’s mobile operating system Firefox OS died a slow death earlier this month. Intended at developing countries with smartphones as cheap as $25, Firefox OS based smartphones could never gained popularity. I think lack of popular apps and cheap hardware was the main reason.

In December, Mozilla announced that it will stop developing Firefox OS and also stop the sale of Firefox smartphones.

Though it is never announced, I think even Tizen, Linux foundation’s own Linux based mobile OS, is dead as well. I don’t see any development news on Tizen and Linux Foundation never promotes it. It is just the matter of time when we will be invited to the funeral of Tizen.

There were lots of heated discussion in May this year when Kubuntu project lead, Jonathan Riddell was forced out by Ubuntu Community Council. Jonathan had asked questions about how the donations received by Ubuntu is being spent. He had complained that Kubuntu never saw the money.

This led to an exchange of accusation between both sides. Ultimately, big daddy of Ubuntu, Mark Shuttleworth asked Jonathan to step down.

Linux creator Linux Torvalds is known for the use of abusive language. Linux Kernel dev Sarah Sharp is also known for being out spoken.

Sarah Sharp had earlier locked horns with Linus Torvalds in 2013 when she publicly advised Linus to keep “verbal violence” off the mailing list. Linus did not take it lightly as well.

That was in 2013. In 2015, Sarah announced that she is stepping down from her work in Kernel community because the communication style lacks basic decency and is brutal and profane.

This move left people discussing if Linux Kernel community should really change the way they behave or if Sarah took things too far.

While gaming on Linux is still the Achilles heel for Linux users, the community got excited when gaming engine Unity announced that it is testing its game editor on Linux. As Linux is used very well for rendering, it is speculated that this move will bring game developers to Linux. It is not confirmed yet if Unity will actually bring a final Linux version of its game editor though.

Cost cutting was one of the major factor in this decision as the city administration saved hundreds of thousands of Euro by adopting Open Source.

As with any other year, 2015 also had some positive and some negative moments for Linux lovers. We saw competitors like Microsoft and Apple coming close to Linux, government organizations adopting to open source. At the same time, we witnessed the failure of Firefox smartphone OS. A mixed year, I would say.

What do you think? I let you share what you think was the most important news for Linux-ers in the year 2015 and your overall feel about it.