10 Things To Do After Installing Linux Mint 17 Qiana

Update: Since Linux Mint 18 has been released, do follow our article on things to do after installing Linux Mint 18.

By the way if you are struggling with dual booting Linux Mint 17 with Windows, read:

Things to do after installing Linux Mint 17 Qiana:

Let’s take a quick look at what are the first few things that you must do for a smooth Linux Mint experience.

First thing to do after installing any OS is to update it. This is because there must have been several updates release since the OS image was released. To update the Linux Mint system, open a terminal (Ctrl+Alt+T) and use the following command:

Talking about updates, there are several levels of updates in Linux Mint, labeled from 1-5. Usually you’ll only see updates from level 1-3 (which are considered to be safe by Linux Mint community), but you can make an exception for level 4 and 5 security updates. Ubuntu have them by default, you can have it as well. It’s up to you to choose between security and stability.

While Linux Mint packs all the necessary things to run it out of the box, it does not mean you may not have troubles. Linux desktops are known for having hardware drivers issue. Third party proprietary drivers are not installed by default. It is advisable to look if there are any proprietary drivers available for your system. This usually avoids troubles with wireless and graphics related common issues.

Go to System Settings ->Administration ->Device Drivers. If there are any additional drivers available for your system, it should be listed here.

Overheating and reduced battery life is common issue in laptop these days. TLP, a power management tool for Linux, can help you in this regard. Install TLP using the following command:

No configuration required for using TLP. Install it and forget about it. Alternatively and additionally, you can use CPUFREQ. Read this article how to use CPUFREQ to reduce overheating in Ubuntu.

To avoid errors like “There is no command installed for RAR archive files“ install RAR in the following manner:

Music fan? Install Spotify desktop Linux app (still in beta but works fine) and enjoy the music in native environment. Open a terminal and use the following commands:

This will add the above repository in software sources list. Now add the GPG key:

Next is simple. Update and install Spotify client.

Your screen is either too bright or too dull? And if you try to change the brightness using the function key on keyboard, it does not work. Don’t worry there is nothing wrong with your keyboard and you are the only one having this issue. It is a known bug and there is a good way to fix it for people who have Intel graphic card.

You can follow this tutorial to fix brightness control issue in Linux Mint 17.

Since Ubuntu One is shutting down, it leaves us with Dropbox as the leader of cloud services with native Linux client. You can install Dropbox either from its website or Software Manager. Though I did not, but if you find that Dropbox indicator is missing, try this post to fix missing Dropbox indicator.

Did you notice that the default search engine in Firefox is Yahoo. And this is not it. You can change it to various search engine in the settings except Google. By default Google is not even available as an option here. If you prefer Google for search and Firefox as your main web browser, you can add Google to Firefox as an addon.

While using Firefox, go to this link. On this page, click on Add to Firefox. It will also ask if you want Google to be the default search engine. You know what you have to do :)

Linux Mint is better than Ubuntu in this regard. In the System Settings of Linux Mint, you can browse a list of available themes, extensions, desklets (desktop widgets) and applet indicators, that too in segregated sections. You should click on Get more online to refresh the cache and get more such goodies to browse from. 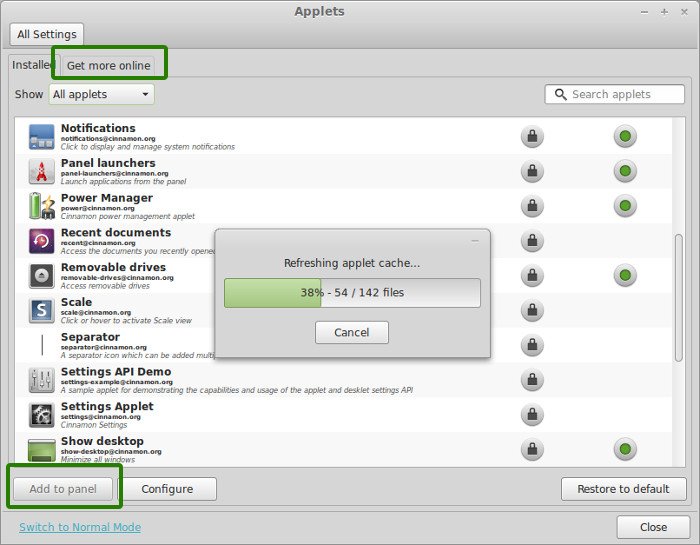 Another web browser is a must. You can install Google Chrome by downloading the installer from its website. Apart from that, based on your need you can find plenty of applications under various categories in Software Manager. If you are in to movies and TV series and have no legal and moral restrictions on piracy, you can install Popcorn Time torrent streaming app.

There are plenty of other things to do which varies from person to person. What else do you do or plan to do after installing Linux Mint 17? Do share your it with us.