Brief: Once the flagbearer of open source adoption, the city of Munich is finally shutting the door on Linux in order to welcome Windows.

German city Munich was among the first to opt for Linux as the main operating system and adopt open source office product. After more than a decade, the city of Munich is going back into the lap of Microsoft, much to the dismay of the Linux users worldwide. 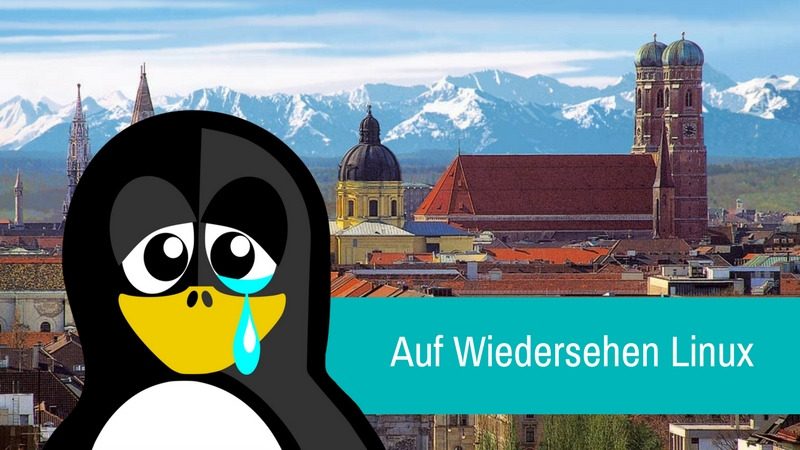 To give you a little bit of history, Munich city council voted for an open source policy back in 2004.

Debian was the initial choice but later it was switched to a custom Linux distribution LiMux which is based on Ubuntu. WollMux, OpenOffice with custom templates, is used for the office suite. WollMux eventually switched to LibreOffice for the obvious reason that OpenOffice is good as dead.

The transition to LiMux took several years to complete. It was in December 2013 that the switch to open source was completed.

Open source enthusiasts from across the globe lauded this effort and called it a model success story to be followed by other organizations.

While other European cities also started to adopt for Open Source alternatives, the trouble started brewing in Munich sooner than expected.

Apparently, (some of) the employees of city administrations expressed their displeasure on working with Linux and LibreOffice. While the transition was successful, not providing adequate training to employees was what lead to this discomfort.

While switching to Linux might have saved Munich city millions of Euro, then mayor Josef Schmid claimed that the change has been driven by ‘ideology’ rather than a view to taxpayer savings. He might be correct in pointing so. Because the original decision was based on “the desire for strategic independence from software suppliers”

Back in 2003, when discussions were ongoing in Munich to opt for Linux, then Microsoft CEO Steve Ballmer (infamous for calling Linux cancer) offered a 90% discount on all Windows licenses. Though the duration of the discounted license is not clear. Was it for one year, 2 years, 5 years?

The basis of this claim was a study done by HP and financed by none other than Microsoft itself. This Microsoft propaganda was quickly called out by a number of Linux publications and independent bloggers. Interestingly, Microsoft never made this so-called study public.

Back to square one

Fast forward to 2017. The euphoria over Munich’s open source adoption has died down. The rumors have turned to be true. Munich is going back to Microsoft.

The general council has approved a proposal that the city should look for how long it’ll take to create a Windows 10 client, and what would be the cost.

According to the Document Foundation (parent organization of LibreOffice), this step back to Microsoft will cost around 90M of taxpayer’s money.

It’s not a technical issue, it’s a political issue

Karl-Heinz Schneider, the man behind LiMux project, has called it a political decision rather than a technical one. Schneider protested:

“We do not see any compelling technical reasons for a change to Windows and Microsoft Office… We solve compatibility and interoperability problems by providing MS Office, mostly virtualised, at workplaces that need to work together with external offices on office documents.”

Schneider claimed that the decision had been political, “not made on the basis of facts”, with even Accenture (the company that did recent analysis on the usage of LiMux) recommending the continued use of LibreOffice.

It’s heartbreaking for Linux and open source lovers because for long we have been touting Munich an example to be followed. Indeed, many other government organizations did get inspiration from Munich’s Open Source adoption.

If the success of Munich lead to more open source adoption, will its failure have a negative impact as well? What do you think of it?