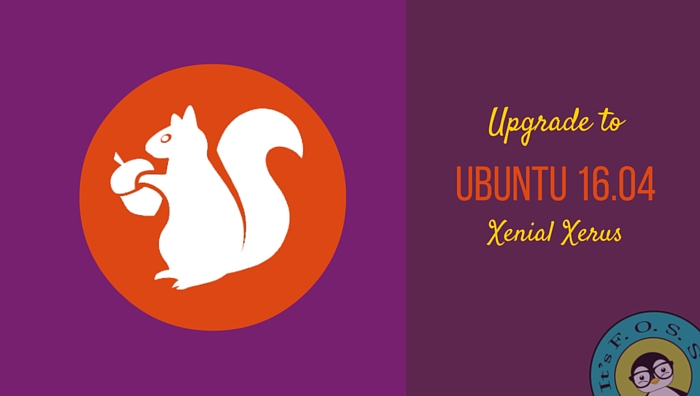 These are some of the genuine questions that you might be thinking as Ubuntu 16.04 release is nearing. Worry not, I try to answer all the Ubuntu 16.04 upgrade related questions in this post.

And the answer to that question is: it depends. It depends on which version of Ubuntu are you using currently. There are two main factors to keep in mind.

A long term support (LTS) has a life cycle of 5 years while the normal releases get the support of only 9 months.

The end of life dates will help you make up your mind.

Second thing to keep in mind is the effort to upgrade to Ubuntu 16.04. The version you are using at present plays a vital role in it.

To summarize, If you are using:

And if you are using any of Ubuntu 12.10, 13.04, 13.10, 14.10 or 15.04, you MUST upgrade. These versions are no longer supported. You should not be using them. Problem is that you cannot directly upgrade to Ubuntu 16.04. You must go through each next release upgrade. I would suggest a fresh install instead of upgrading your system in 3-4 releases.

Ubuntu 16.04 has been released. You may get a notification about its availability if you are using Ubuntu 15.10. Sometimes, it also takes a few days before everyone gets notified about the availability of a new version.

Ubuntu 14.04 users will be notified for the upgrade after the first point release of Ubuntu 16.04.1 (which is released now).

To make things sure, you should verify the Software source settings. It should be set to notify you of either “any new version” or “LTS version”.

Go to Unity Dash and look for Software & Updates:

Go to Software & Updates -> Updates. In here, make sure that Notify me of a new version is set to For any new version or for LTS version.

In the coming days, when you run the Software Updater, it will notify you of availability of Ubuntu 16.04:

The software on this computer is up to date.

However Ubuntu 16.04 is now available (you have Ubuntu XX.YY).

Click on upgrade… to upgrade to Ubuntu 16.04 and follow the instructions afterward. Things are pretty straight forward from here. I hope you can handle things from here. But if you have questions, feel free to use the comment section.

That’s it. I hope you found this tutorial helped you to make your mind about upgrading to Ubuntu 16.04. As I mentioned in my earlier post about how to help Linux, testing a software is also a way to help Linux community for it helps in finding bugs. So if you find few bugs in newly released Ubuntu 16.04, please file a report.

P.S. If you opt for a fresh install instead, read this list of things to do after installing Ubuntu 16.04 to get a better and smoother start with it.