Open Source is Taking Over Europe! 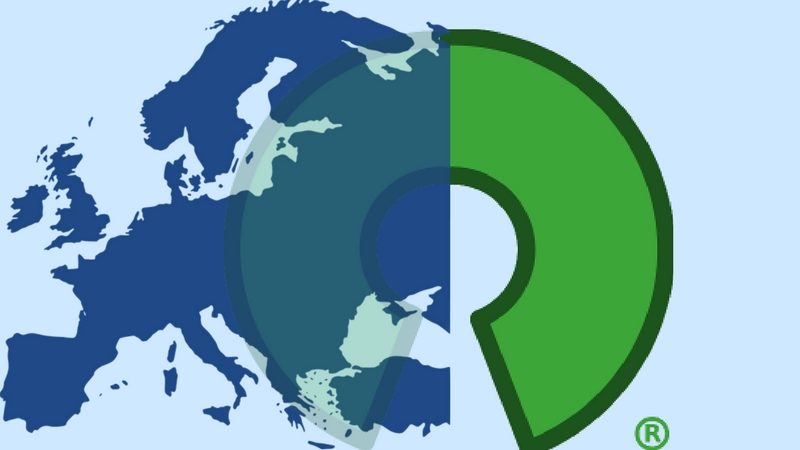 The commune of Mappano (Italia) in the neighborhood or Turin, has decided to use free and open source software for its IT infrastructure and eGovernement services.

If you follow It’s FOSS regularly, you remember earlier this year, we regretted Munich was turning its back on free software. Of course, Mappano is not Munich. It’s a municipally counting around 7000 inhabitants and established in 2013 from the reunion of several territories. What made that case interesting is, until recently, Mappano was temporarily administrated by a prefect. And it’s only in June 2017 the first Mappano municipality was elected.

So, this is a rare case of a public administration having the opportunity to start its IT infrastructure from scratch. And it was one of the first decision of the newly elected council to build their infrastructure and the eGovernement services based on free and open-source software.

Some might see in that news the sign free movement leadership has moved toward the south of Europa? Maybe. Maybe not. So I decided to investigate about the adoption of Open Source software in public administrations across the European Union.

The Open Source Observatory and Repository (OSOR) is a project launched by the European Commission for exchanging information, experiences and best practices around open source solutions for use in public administrations.

It was my primary source of information here. But unfortunately, if the OSOR provides lots of qualitative data, there was not many quantitative data available. OSOR is currently considering to provide systematic and aggregated data by 2018.

So, today, I had to resort on some sub-optimal heuristics to try to obtain the information I was looking for. The OSOR provides a news feed with associated metadata. So, I crawled their website to extract all the “news” having the “eGovernance” tag and sorting them by country. You can find my (quick and dirty) extraction tool here.

Using Gnuplot (the script is on the gist link above), I end up producing that graph. 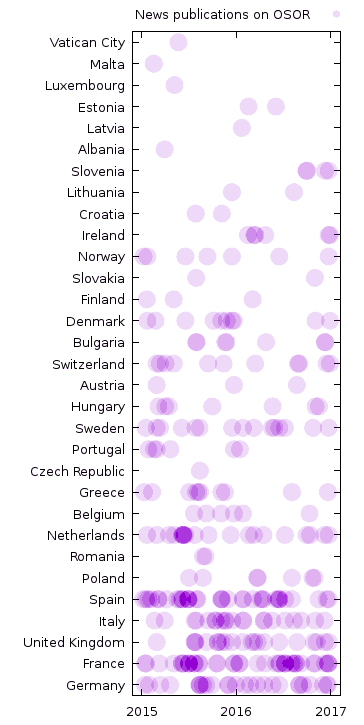 What does that tell us? Well, that graph shows the news published by the OSOR per date and per country. In addition, I sorted the countries by population (in ascending order). It is rather expected to find the “larger” member state to attract more attention in the published news.

Open-source makes its way in the European public administrations

Still, according to the OSOR the most frequently mentioned countries for eGovernment news publications from 2015 to 2017 are, starting with the most often mentioned state: France, Spain, Germany, United Kingdom, Italy, Netherlands, Sweden, and Denmark. Starting from now, I will especially focus on those 8 countries.

You may have noticed some relatively “small” countries entered in the top 8 of the country cited in the OSOR news: Netherlands, Sweden, and Denmark. To give you some reference, Spain count 46M inhabitant, that’s more than twice the population of the Netherlands (17M inhabitants).

A trend confirmed by other sources

Measuring the dynamism of a country in term of adoption of open source software in public administration by counting the news published on a website is far from being a scientific proof of that dynamism. If you’re a graduate student or researcher maybe that would be a topic of interest to choose! However, given the absence of quantitative studies, we can still wonder if the data obtained by crawling the OSOR website were not biased. So, I crosschecked the data by comparing them with the number of news found by Google Search on a similar topic. 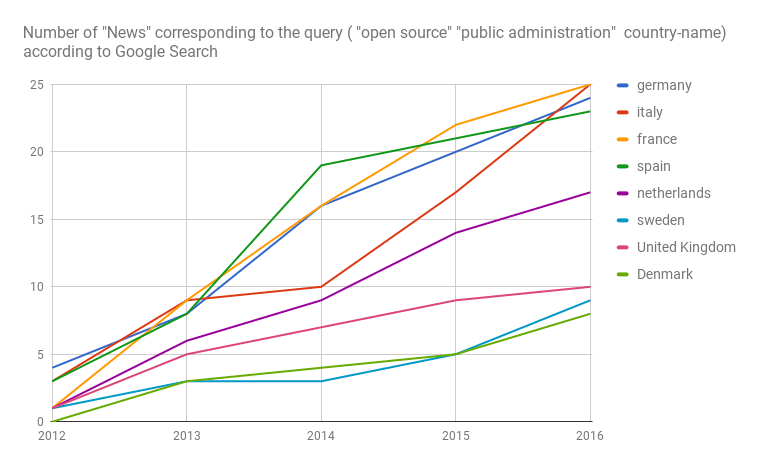 Anyway, the graph confirms a continuous growth in the number of news items talking about free software and public administration. At the very least, that can confirm this is a trend rather than just a passing interest.

Do the size really make all the difference?

Given that trend, is open-source adoption in public administration a matter of country size? I already mentionned this was not the case. But in addition, relatively small countries seem as dynamic as the major countries of the EU. In particular, Spain (46M inhabitants) appears here as dynamic in that area than France (67M inhabitants) or Germany (80M inhabitants).

For what it worth, I took the same data from Google Search but adjusted them first according to the country population, then according to the gross domestic product. And obviously, the leaders no longer appear to be the same. 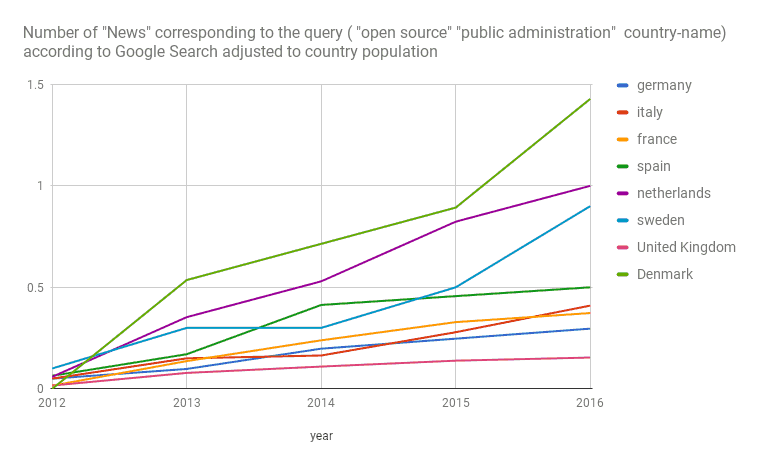 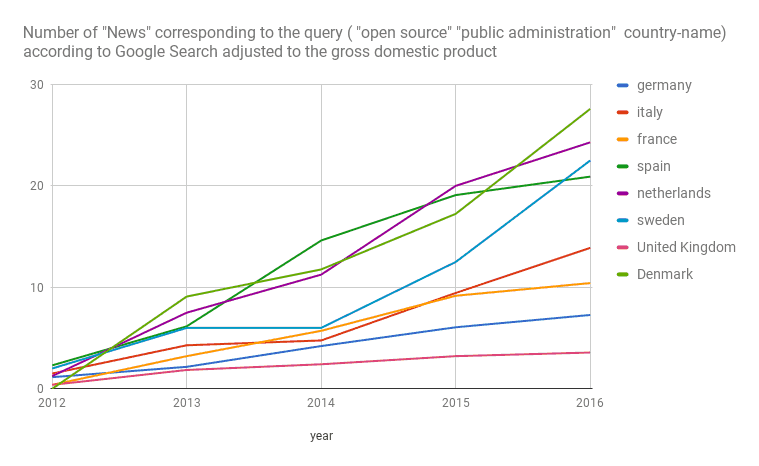 I will not fall into the trap of drawing any conclusion here. I would certainly need more accurate and comparable data for that. And if you know where to find such data, certainly I would like to hear about your in the comment section below.

Anyway, what we may hope in seeing those graphs is the adoption of the Open Source technologies by public administrations is not a question of size or budget. This is a question of political will.

It’s a question of political will

Spanish government encourages its public administrations to use free and open source software since 2007. And it even has an official GitHub account: https://github.com/ctt-gob-es

And this is certainly not the only government you will see there: https://government.github.com/community/

Coincidence or not, still in 2007, ‘The Netherlands in Open Connection’ plan was published to encourage the use of open specifications and open source software in the public and semi-public sector. That early engagement towards the open-source solutions is certainly no stranger to the dynamic we may see today.

And if you want to learn more about similar initiatives that were taken by other Europe’s leading public administrations, I encourage you to take a look at the Open Source Observatory Annual Report 2016 and to read this great presentation by Gijs Hillenius written for the 2017 FOSDEM.

Finally, speaking for a country I know a bit better, France is certainly active too, and indeed is the most often mentioned country in the OSOR news about eGovenment. Hopefully, it will be even more active in the future when we will see the full effects of the Circulaire Ayrault that was adopted in 2012. And we may expect Mounir Mahjoubi, the French Secretary of State in charge of Digital Affairs, and the whole new French government will reinforce their commitment to open-source solutions. That, however, only the future will tell us.

So, if you have a blog, why not publish about that? Or, simply, use the comment section below to share your experience and hopes with digital administrations and FOSS adoption there.