This article is second in the series of “my experience with Linux and/or open source”. You can read the first story about Roy and how he uses Linux on a 13 years old laptop. If you want to share your story, feel free to contact me: Abhishek

Before I came to Linux, I taught computer programming in Southwestern University, Cebu City Philippines from 1990 to 1999. My students learned Turbo Pascal, Turbo C, Assembly Language, Prolog and others in Microsoft DOS/Windows platform.

After nine years of teaching in university I quit my job as professor and I started consultancy and software development services of my owned serving many local clients. During this period a lot of different issues came up from viruses to software piracy that were affecting both users and developers. Viruses affect the efficiency of our computer systems because Windows OS by itself is not secured. Most of our software are pirated copies because Philippines is a third world country and buying licensed software is beyond our budget.

In 2004, I did a lot of research about Linux OS and learned about many of its advantages. I had several tries and eventually I replaced Windows XP with Ubuntu. It is 12 years since than and I have never looked back. My 12 years of Linux experience has made me feel comfortable in managing my small computer service. My shop is one of its kind for it has many software tools that easily serves the demands of our clients and my business has survived until today relying mainly on Linux OS and Open Source applications.

In the middle of 2015 I decided to share my knowledge on Linux to poor kids in the community. I also believe that a person can be very proficient if he is well-trained while he is still young. I felt Linux is the best platform that our younger generation must learn because of its features and advantages over its competitors. I got interested in Linux because it is the most widely used system from the smallest gadgets to supercomputers. The fact that android smartphones is the most dominant mobile product nowadays and it is built on Linux.

In June of 2015, I founded an educational charity and named it as FREE COMPUTER LITERACY TO POOR CHILDREN, with the help of local donors. The main objective of this charity project is to give good quality informal computer education for FREE to poor children. It is mainly offered to the children of poor families. It is open to all for as long as that a child belongs to the poor family regardless of skin color, religious and political affiliations.

Funded by good Samaritans who never expect something in return, this project is managed, run, administered by me together with my wife Liezel, a public school teacher. A few local volunteers, who are also knowledgeable in Linux, contribute to our effort. My children also help in running this project for they have experience in Linux environment since they were exposed to Linux when they were still young. At home and at work, we use Linux applications daily.

Open Source is my ‘official’ partner and the main instructional standard. That means all modules should be taught in Linux. This project has three major impacts to our students:

I want them to be self-sufficient in terms of computer skills. In Philippines poverty is the biggest problem. It’s my dream that through this project these poor kids can have a fair chance of attaining a better future. It sounds great and amazing, and it’s a rare project that many people has got interested in it. I started with just two personal computers teaching the poor kids with different modules such as basic typing (Word processing and spreadsheets), graphics design, audio/video editing, animations, troubleshooting, and program coding.

In implementing this project I select my house as the temporary venue because I cannot afford to rent an office space due to budget constraints. I paid all the bills (electric and internet) encurred, office supplies and other consumables used during our operation. When times come that project grow I will move this to a place big enough to accommodate all the equipments, but of course with enough financing. 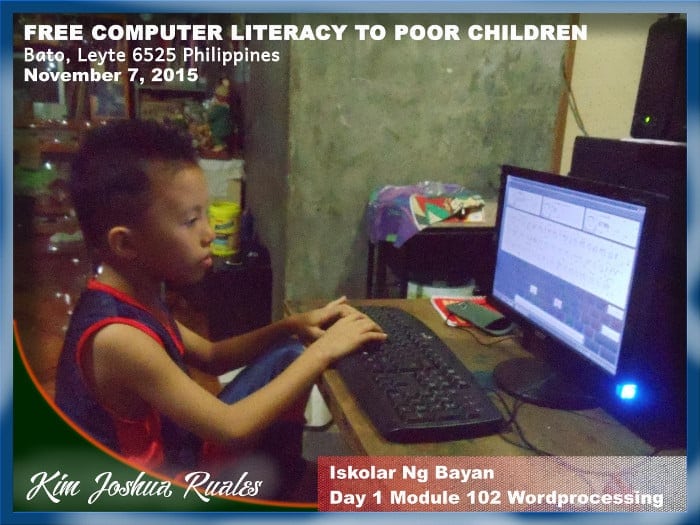 After giving substantial trainings to those poor children of Barangay Ponong, I will offer my services to next adjacent Barangays. This advocacy requires courage, dedication, financial donations cannot be done by me alone but by the help of the people who has the desire to make life a lot better. Probably Linux community has something offer to make this startup project a success.

2015 is a great success for this project for many children been initially benefited. More local donors have contributed. This project has already made its presence on the internet through Facebook. It’s my intention to help the poor through this missionary work. I love to spread the real values of sharing inculcated in the hearts of every Linux users. Increasing the adoption of Linux by offering them as the best platform for learning information technology to younger generation. Teaching Linux to poor children in effect will increase its user base.

Any other questions, post me a message. Opinions, suggestions, criticisms are highly welcome and appreciated.