Brief: Installing Ubuntu 17.10 bricks many Lenovo and some Toshiba and Acer laptops. Canonical has removed the Ubuntu 17.10 downloads from its website and will rerelease it on 11th January. 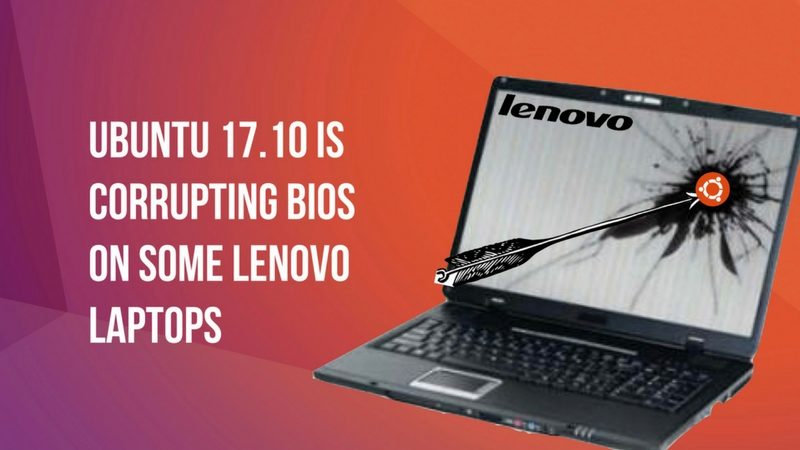 Important Update: Ubuntu 17.10 BIOS bug has been fixed and the ISOs will be re-released on 11th January.

If you have a Lenovo laptop and you want to install the new Ubuntu 17.10 on it, you should forget about it, at least for now.

Ubuntu 17.10 users have been reporting a bug that corrupts the BIOS on a series of Lenovo laptops. Even live booting the system could impact it.

As OMG Ubuntu reports, the affected users are unable to save settings like boot order or the boot devices. Some users say there is a complete setting reset after the reboot, some can not even exit the BIOS as well as the inability to boot from a USB. Not booting from a USB poses a very big problem for users as their machines don’t have a CDROM.

The bug report filed on Launchpad says “Many users are reporting issues with bios corruption with 17.10. This seems to stem from enabling the intel-spi-* drivers in the kernel, which don’t appear to be ready for use on end-user machines”.

As of now, a reliable fix for this bug has not been found yet, even though some users have come up with certain solutions on forums. The present solution given on Launchpad, for now, is for users to disable the intel-spi-* drivers in the kernel. According to the test case, the “fix has been verified by our HWE team on affected hardware”.

Acer and Toshiba are also impacted

It’s not just Lenovo that keeps getting in trouble with UEFI? Of course, last year they were in the news as their UEFI settings didn’t allow installation of Linux. But this time they are not the only one.

The bug has also affected Toshiba Satellite S55T – B5233 and some Acer laptop models. As of now, two models, Acer Aspire E5-771G and Acer TravelMate B113 have been identified. You can check the list of all models that have been affected so far in the bug report here.

List of models that have been surely affected by this bug

The bug could impact any manufacturer that uses BIOS based on Insyde Software.

Meanwhile, Anthony Wong of Canonical, the parent company of Ubuntu, says they are “treating this issue very seriously”.

Upon writing this, Canonical has disabled direct download of Ubuntu 17.10 but the torrents are still available along with the minimal install option. They have put up a notice on the website:

The download of Ubuntu 17.10 is currently discouraged due to an issue on certain Lenovo laptops. Once fixed this download will be enabled again.

For Lenovo, the Yoga series has been the most affected ones. Those with Thinkpad are yet to be affected by this bug.

What about other Ubuntu 17.10 flavors?

Lubuntu has tweeted that they are investigating it and advised to avoid using Lubuntu 17.10:

We're aware of issues at the moment that installing Ubuntu (and Lubuntu) 17.10 on some Lenovo laptops can corrupt the BIOS. We are exploring respinning the 17.10 ISOs and will keep you updated, but for the time being, install 16.04 instead.

We apologize for the inconvenience.

Other Ubuntu flavors have also either put a warning or pulled the ISO.

As per Abhishek, it is better to avoid any Ubuntu 17.10 flavors until this bug is fixed. You can also try the workaround but avoiding it is the best thing to do right now.

Have you had similar issues with your laptop while using Ubuntu 17.10? Share your experience with us in the comment section below.

Ubuntu 17.10 is being re-released to fix the BIOS bus