How Much Swap Should You Use in Linux?

How much should be the swap size? Should the swap be double of the RAM size or should it be half of the RAM size? Do I need swap at all if my system has got several GBs of RAM?

Perhaps these are the most common asked questions about choosing swap size while installing Linux.

It’s nothing new. There has always been a lot of confusion around swap size.

For a long time, the recommended swap size was double of the RAM size but that golden rule is not applicable to modern computers anymore. We have systems with RAM sizes up to 128 GB, many old computers don’t even have this much of hard disk.

But what swap size would you allot to a system with 32 GB of RAM?  64GB? That would be a ridiculous waste of hard disk, won’t it?

Before we see how much swap size you should have, let’s first quickly know a thing or two about swap memory. This will help you understand why swap is used.

The explanation has been simplified for (almost) everyone’s understanding.

What is swap? When is swap used?

Your system uses Random Access Memory (aka RAM) when it runs an application. When there are only a few applications running your system manages with the available RAM.

That sounds cool. This means if you allocate like 50GB of swap size, your system can run hundreds or perhaps thousands of applications at the same time? WRONG!

If an application relies too much on the swap, its performance will degrade as it cannot access the data at the same speed as it would have in RAM. So instead of taking 1 second for a task, it may take several minutes to complete the same task. It will leave the application almost useless. This is known as thrashing in computing terms.

In other words, a little swap is helpful. A lot of it will be of no good use.

Why is swap needed?

There are several reasons why you would need swap.

Do you need swap if you have lots of RAM?

This is a good question indeed. If you have 32GB or 64 GB of RAM, chances are that your system would perhaps never use the entire RAM and hence it would never use the swap partition.

But will you take the chance? I am guessing if your system has 32GB of RAM, it should also be having a hard disk of 100s of GB. Allocating a couple of GB of swap won’t hurt. It will provide an extra layer of ‘stability’ if a faulty program starts misusing RAM.

Can you use Linux without swap?

Yes, you can, especially if your system has plenty of RAM. But as explained in the previous section, a little bit of swap is always advisable.

In fact, a distribution like Ubuntu automatically creates a swap file of 2 GB in size. This should give you an indication that having some swap space is recommended.

Don’t worry if you didn’t create a swap partition while installing Linux. You can always create swap file in Linux at any time.

Swap files allow you to create and use swap space on the fly in Linux. You can easily create them, resize them or delete them as per your need.

Learn About Swap Files in Linux 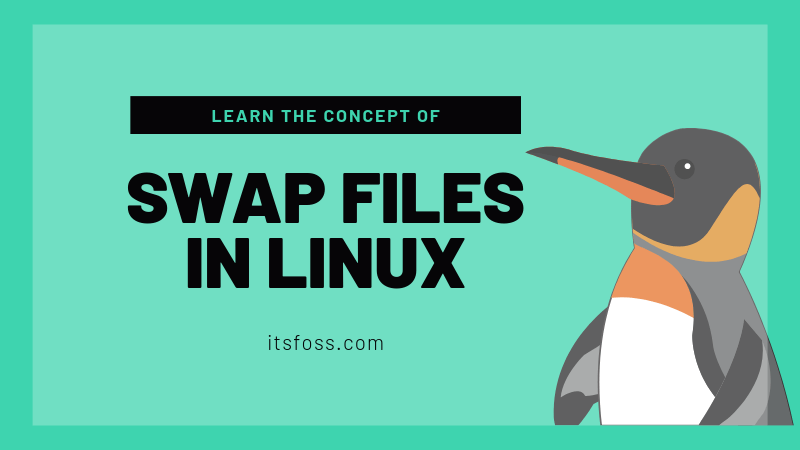 How much should be the swap size?

Now comes the big question. What should be the ideal swap space for a Linux install?

And the problem here is that there is no definite answer to this swap size question. There are just recommendations.

Different people have a different opinion on ideal swap size. Even the major Linux distributions don’t have the same swap size guideline.

If you go by Red Hat’s suggestion, they recommend a swap size of 20% of RAM for modern systems (i.e. 4GB or higher RAM).

CentOS has a different recommendation for the swap partition size. It suggests swap size to be:

Ubuntu has an entirely different perspective on the swap size as it takes hibernation into consideration. If you need hibernation, a swap of the size of RAM becomes necessary for Ubuntu.

Confused? I know it is confusing. This is why I have created this table that will give you the Ubuntu recommended swap size based on your RAM size and hibernation need.

How much swap size do you use?

The answer is never simple. As I stated earlier, for a long time, swap has been recommended to be of double the size of RAM. In fact my Dell XPS 13 Ubuntu edition has 16GB of swap size for an 8GB of RAM. So even Dell decided to go with the golden rule of swap=2xRAM.

What swap size do you prefer for your Linux system?