LOL! Google Thinks Arch Linux is Based on Ubuntu

Brief: Search ‘Ubuntu based distros’ on Google and laugh at the recommendations as Google shows Arch, Debian etc in the search result.

This is what every Linux user already knows.

But not Google, apparently.

If you search for ‘Ubuntu based distros’ on Google, you would see a result similar to this:

This was shared on Reddit (I cannot find the link). I found it amusing and shared it on It’s FOSS Facebook page. This is when a few readers pointed out that it’s not Google’s fault because it is getting the result from FossBytes.

Is it FossByte’s fault then? The short answer is, No.

If you try to search the same query again, Google shows similar recommendations from TechRadar. This time CentOS is also considered as an Ubuntu-based distribution.

Why does this happen then? Is Google’s AI that stupid that it recommends Arch and CentOS as Ubuntu-based distributions?

Why does Google think Arch Linux is based on Ubuntu?

For that, you should have a slight understanding of how Google search works in this case.

Lately, Google has started to answer your queries directly on the search page instead of giving you the links to the websites. This is called featured snippet in search engine optimization terms.

Google scrapes some useful information from one of the top five websites for the searched terms and displays this information to save your time. And this is where things get interesting.

If you look at the entire search result, you’ll know understand why Google displayed that weird recommendation. 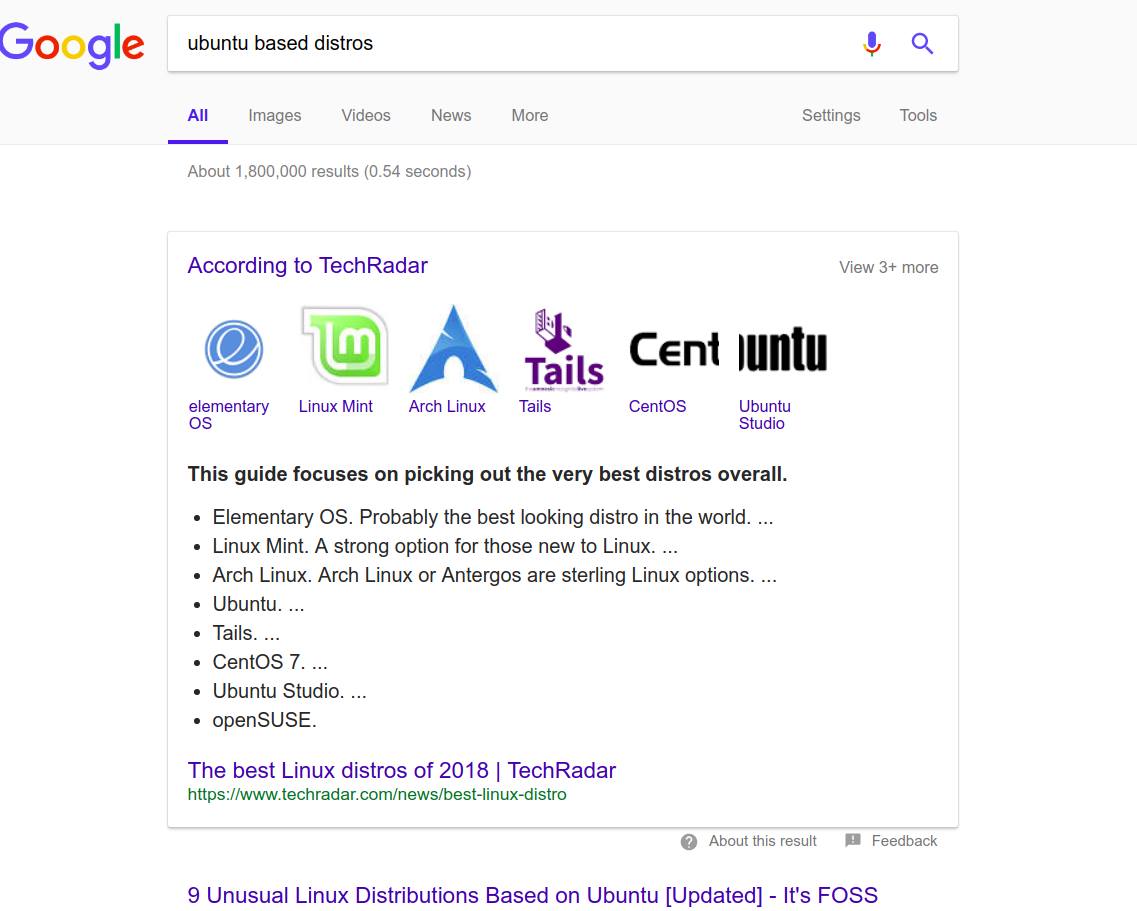 As you can see in the above picture, Google is displaying the information from the article that talks about best Linux distros of 2018.

Why Google thinks that the best answer to ‘Ubuntu based distros’ is ‘Best Linux distros of 2018’ is beyond comprehension. Google works in mysterious ways after all.

Of course, this is misleading and indeed not good for the reputation of websites like FossByte or Tech Radar. Unsuspecting people might think that these websites are stupid for suggesting Arch Linux as an Ubuntu-based distribution. They should throw a lawsuit against Google perhaps. Just kidding :)

I know this article is not strictly a useful one but the next time you see a weird recommendation from Google in the search results, you would know the reason behind it.