KDE's New Elisa Music Player: So Close, Yet So Far Away

With the rise of streaming services bringing easy access to media, owning your own music and movies is at a seemingly all-time low. In my case, it wasn’t until recently that I started recollecting local music files again once I started caring more about the quality of music that I was listening to.

Over the last year, I have proudly grown my digital music collection to an all-time high. The only problem is that the FOSS world has left me wanting when it comes to music playback. Clementine is starting to feel outdated and clunky, Lollypop was fine when I was using GNOME, but it doesn’t look quite as at home on my current Plasma desktop, and Amarok has been a no-go for me for years. But, as of last week, that is all about to change.

I have had my eyes on several FOSS projects as of late, and one of which that I am most excited about is Elisa: a Qt-based application designed by the KDE team that looks great in the Plasma desktop but is designed to be used in any DE. I have been using Elisa since the day it came out on April 12, but I still hesitate to call this a review since that’s not really enough time to run into very many bugs or to give Elisa a proper ride around the block. So here is my what I am calling a PREVIEW of Elisa’s debut 0.1 release. (First image below is pulled from the Elisa webpage, while all other images are of my own desktop). 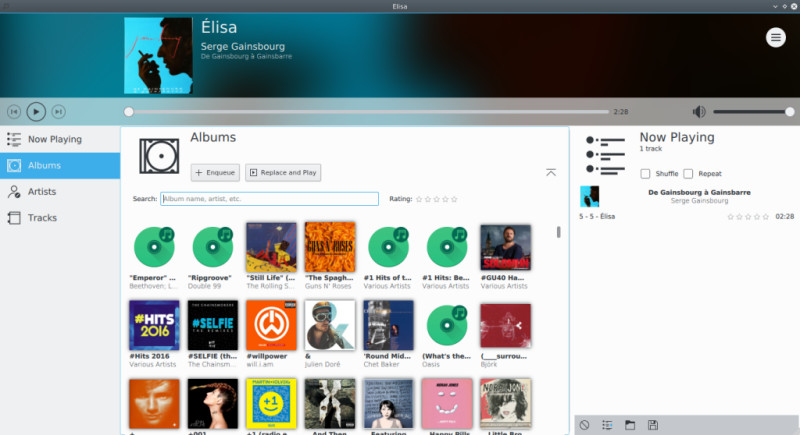 First, let’s focus on the aesthetics. Elisa is minimal, clean, modern, and looks more at home in Plasma 5 than almost any other application. The icons are all pulled from the existing icons found throughout the DE, the colors perfectly match the rest of my OS, and the setup is intuitive and easy to understand. The design of it screams simplicity and really does seem easy to use and unintimidating right off the bat.

You have your Now Playing, Album, Artists, and Tracks categories on the left hand side, the content of those categories in the middle, and the current playlist on the right hand side. The only time this is an exception is if you are in the Now Playing category. In this case, the right side appears to show what would be the album art, though I cannot seem to get Elisa to pull in album art no matter what I try. 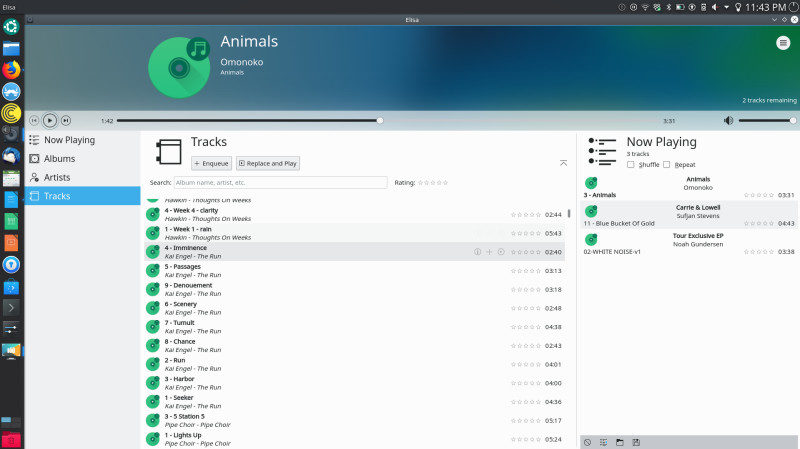 The top of application shows that would-be album art of the track you are listening to and displays the blurred image of that album across the top banner. In this “banner” section, there is a small hamburger style menu button in the top right section of the application. This is where you can access the applications sparse settings options. The playback buttons and track timeline are nestled horizontally between this top banner section and the panels just below it. The media buttons work as expected and fit in seamlessly with the rest of the application while scrubbing works as expected. Though you can’t seem to click on the timeline to jump to a specific section, you can still either use the media buttons or manually drag the indicator forward and backward to find a specific place in a song.

Overall, from top to bottom, Elisa portrays a sense of simplicity and ease without looking or feeling boring. It is clean, fun, professional looking, and everything is where you would expect. As far as look and feel are concerned, Elisa gets a near-perfect score from me.

This is where I think Elisa starts losing brownie points in my book. As of right now, you can save playlists, upload already saved playlists, and edit your current queue all from that right-hand playlists panel that I mentioned a moment ago. In that sense, controlling music playback is as easy as it gets. And though these queue features are simple and polished, as far features are concerned, this is about all Elisa offers.

The worst part for me is just navigating to the particular song I am looking for. I typically browse my music selection by artist, then I choose the album that I want to listen to once I find the artist, and finally, I pick the songs that I want to listen to once I have found the right album. For me, that is the easiest and most intuitive way to filter through my thousands of songs to find the songs I am looking for. 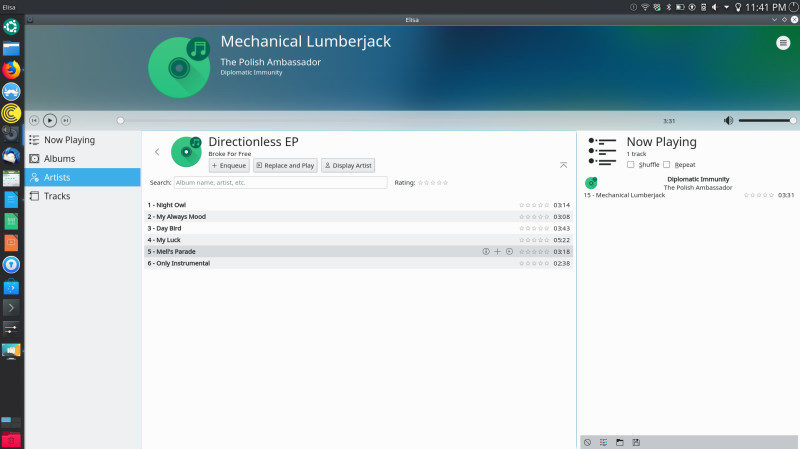 The problem with Elisa is that it does not seem to offer the ability to sort artists alphabetically yet. It sorts albums and tracks alphabetically, but it seems to sort the artists by the order that the songs are listed. And since most of my music is named with the number of the track before the title of each song, the artists are in no meaningful order.

In fact, the only thing that is in a meaningful order is the Album category, which is correctly listed alphabetically. This lack of ability to sort artists is the only real feature that Elisa is lacking that is keeping me from switching to it full time. On the positive side, you can at least use the search function built into Elisa to find the tracks you are looking for, which, honestly is the only thing that has kept me sane over these last couple of days. I am a simple guy with simple music needs, but because of this simple sorting shortcoming, it just isn’t practical for me yet.

The features that Elisa does have are limited to the search functionality I just mentioned, the playlist customization I mentioned earlier, the ability to add multiple music libraries, and the ability to customize very basic keyboard shortcuts, none of which are useful to me (I would argue that none of the keyboard shortcuts are useful to anyone yet). So other than those simple features, the only thing Elisa really does well is the one thing that every music player should do: it plays music. Oh, and it looks flawless while doing it. 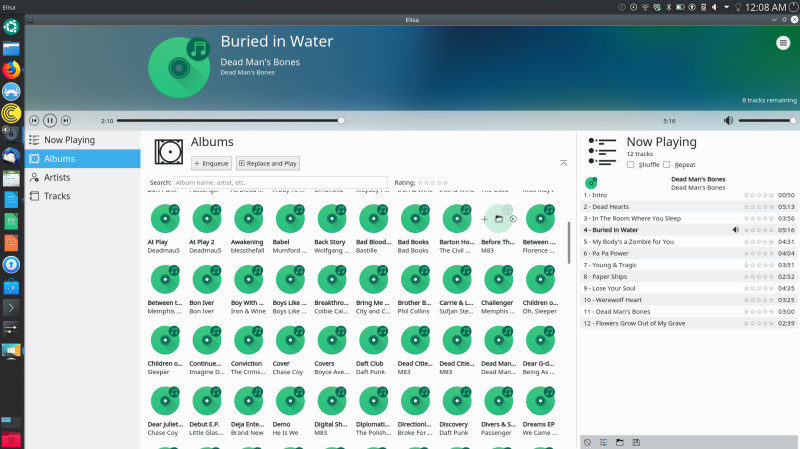 As of right now, Elisa is nothing to write home about. But, I expect that will change sooner than later. The KDE team has already done a fantastic job at laying the groundwork for a very successful music player. And one whose biggest flaw is not is complicated, convoluted, outdated, and confusing UI. Which is more than a lot of my favorite projects can say!

So if you are willing to sacrifice some of the extra functionality that you are used to in applications like Clementine, and you aren’t satisfied with the likes of Lollypop—which let’s be honest, there is no real reason to NOT be satisfied with Lollypop unless you are like me and you want everything to look unified—then you should give Elisa a shot. It does what it should do, it has a hopeful development future, unlike many other FOSS projects, and it looks amazing all the while.

Since I am currently running KDE Neon, downloading the application was as simple as running sudo apt install elisa in Konsole, but you can check out how to download it for yourself over on the KDE Community Wiki. As of right now, you most likely will need to compile the application yourself unless you have access to the AUR or you are running Neon like me. While you are there, you can read more about the future of Elisa, what the release timeline should look like, and what features the team hopes to implement in future releases.

If you decide to give it a go, or you already have, let us know what you think so far. Is all of that time and effort worth making a new music player? Or are you satisfied with the current offerings?

Also, feel free to let me know in the comment section what your current music setup is, as well as what key features you would need to see in Elisa to make you consider switching!