Why You Should Not Buy bq Ubuntu Phone 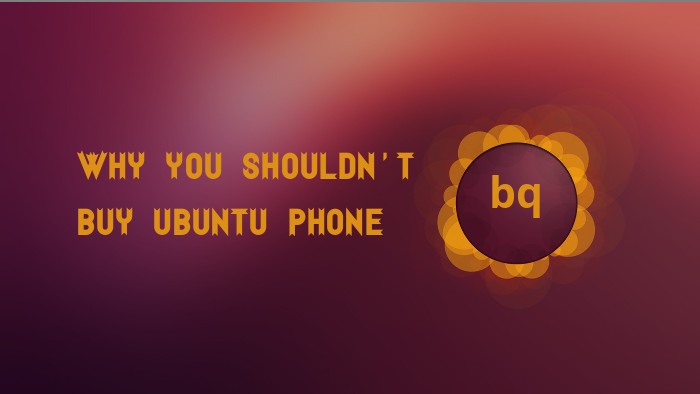 I presume that you have already heard that first Ubuntu Phone has been released by Spanish manufacturer bq. But is it worth to board the ‘me too’ wagon and replace your existing Android or iPhone? For me, I can give you a number of reasons why you should not buy an Ubuntu Phone.

Reasons why not to buy Ubuntu Phone

Surprised that I being an Ubuntu enthusiast advising to not buy Ubuntu Phone? But I have my reasons to say that and I would like to share it with you. So before going on a rampage in the comment box, first take a look at the reasons why buying an Ubuntu Phone could be a mistake.

You should not buy one because you cannot buy one

Puzzled? I mean what is stopping you from buying an Ubuntu Phone? Answer is Canonical and bq themselves. They have opted for the marketing strategy of Xiaomi and OnePlus where they release a limited number of handsets in a series of limited time flash sales. In these kind of sale, interested users wait for sale to start with already filled forms and just hit the button to checkout. But these flash sale attracts a large number of visitors and often results in server outage. It happened with Xiaomi in Indian debut and it happened with bq as well.

When the sale for Ubuntu Phone started at 0900 hours CET on 11 Feb, as expected, bq server crumbled with 12,000 hits coming per minute. Obviously, a huge number of users were left frustrated and agitated. So, Canonical apologized and scheduled another round of flash sale at 1500 CET on the same day. But bq is strange company. It started the sale at 1457 CET. Result was that this lot was sold by 1504 CET. And this left more frustrated users and the frustration was visible on Twitter and on Google Plus page of Ubuntu.

As an avid Ubuntu user, I strongly oppose this flash sale strategy. Just to get the “sold out” status and creating hype in the market, Canonical should not be doing this. Why release a very small amount of phones in one go when you can put all of it on sale.

Needless to mention that since the sale is restricted to Europe so you cannot buy it officially if you are out of Europe.

Your newly ordered Ubuntu Phone is still far away 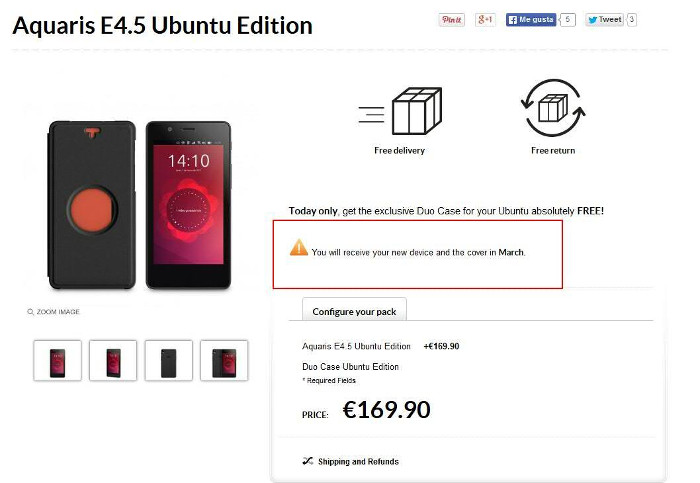 Even if you somehow managed to successfully place an order for Ubuntu Phone, you haven’t won the battle just yet. While ordering, you’ll see a message: “you will receive your new device and the cover in March”. Wait a sec! Did you not order it on 11th Feb? Then why should it reach you in March? And remember, it is not that you would get it on 1st of March because there is no specific date here. It’s just March.

Considering that when bq said that the sales would start next week, many people assumed it would be Monday, 9th Feb. But then it started on 11th Feb. So shall we assume that March could mean mid-March here? There is no information from bq over the shipping dates.

Ubuntu Phone is not meant for regular smartphone users

At no point Canonical tried to hide the fact that the first Ubuntu Phone is not meant for regular smartphone users who use their phone for using chatting apps such as WhatsApp, playing games etc. Ubuntu Phone doesn’t have apps but rather it uses webapps and scopes. Popular games are still far away from Ubuntu. Unlike Jolla’s Sailfish OS, Ubuntu Phone doesn’t even have the capability to run the Android apps.

Therefore you will end up with a smartphone with a limited set of ‘apps’ and will definitely miss your favorite applications in your current smartphone. And that is the reason why normal smartphone users should avoid buying Ubuntu Phone.

I know that considering the price tag of Euro 169, you would say the hardware is just fine. But that could be off putting for many. This is not the kind of specification a core Ubuntu fan would expect from the first Ubuntu phone. It would have been better to launch the first Ubuntu Phone with a little better specification if not as high as Samsung Galaxy S5 or iPhone 6.

But looking at the point that the Ubuntu Phone OS is still in early phase, it might not be able to utilize the full capability of a high end device. Perhaps that could be a reason to launch the phone with the moderate specification. But whatever many be the reason, bq Aquaris is hardly an apt replace for a high end Android or iPhone.

Chinese manufacturer Meizu was rumored to unveil the first Ubuntu Phone at Mobile World CongressCES last year but it did not. It did however displayed the Ubuntu powered Meizu device at Asian Mobile Expo in China. As per reports, Meizu is all set to launch its flagship device MX4’s Ubuntu version at this year’s Mobile World Congress in first week of March.

When you compare the specification of bq Aquaris E4.5 with that of Meizu MX4, you will see a huge difference between the two. Of course there will be a difference between the price too but if you can cough up a few Euro more, I would say to wait for Meizu. There are no release date as such but considering that even bq will start shipping in March, it could be worth to wait for the better device.

What’s your take? To wait or not to wait?

I have spread my cards on the table. What do you think of these points? Do you think it is better to not buy an Ubuntu phone now and wait for either the Meizu MX4 Ubuntu version or let Ubuntu Phone be more developed with more ‘apps’ support and games? Do share your views.