Distros are made by teams. Sometimes those teams don’t get along. This is the story of one of those times. 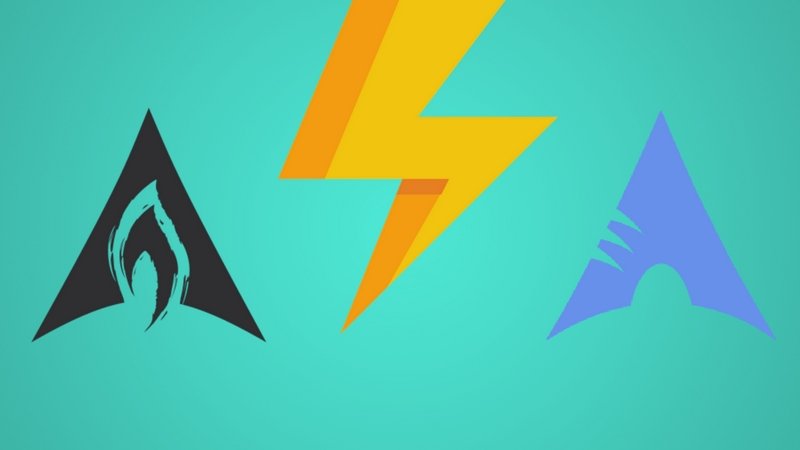 Last month, I was going through my Twitter feed when I stumbled upon something that caught my eye. It was a tweet from Archlabs and it linked to a tweet from a user named ArchMerge announcing a new wallpaper. At first, I thought ArchLabs had decided to change its name, which some distros have done in the past. However, after I investigated further I realized that ArchMerge was another Openbox powered Arch Linux distro. The fact that it looked very similar to ArchLabs stuck out in my mind, so I sent an email to each project to try and get the low down on what was going on.

It turns out that the team that had originally formed to create ArchLabs had fractured over creative differences. It also appears that the split was not exactly amicable. As it stands now, the ArchLabs team lead by Matt is continuing to work on an Arch-based version of Crunchbang while the ArchMerge team lead by Erik Dubois is working to create not just a light Arch-based Linux distro, but a platform to learn how to use Linux.

A Fork in the Road

Since both ArchLabs and ArchMerge started as the same project, I’m going to take a quick look at how each has progressed.

In August, the ArchLabs team launched a cut-down version of ArchLabs R2-D2 named ArchLabs Mínimo. This version removed the Tint2 themes, the Conky themes, a bunch of GTK/Openbox themes and a number of apps. “All LX, QT and K apps and dependencies have been removed,” according to the release announcement. The goal of these removals was to make the ISO under 1GB in size.

As I stated in the ArchLabs review, Pamac (the GUI frontend to Arch’s package manager) came preinstalled. The new release replaces Pamac with Pacli, a bash tools, which does many of the same things. 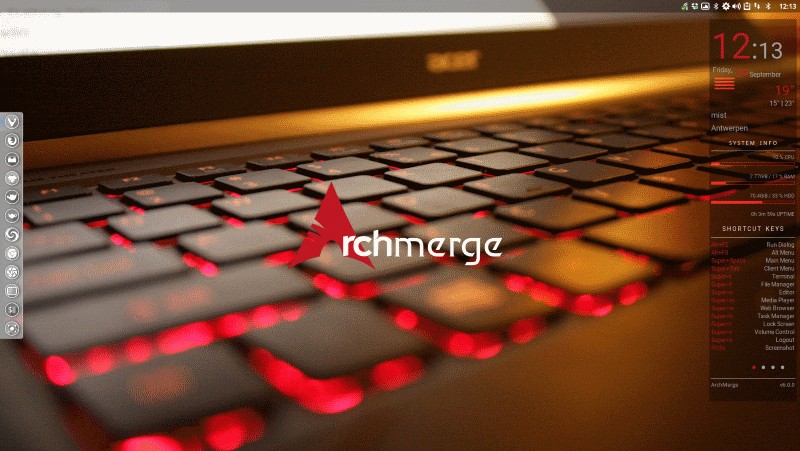 In many respects, when you boot into ArchMerge it looks just like ArchLabs R2-D2. The big difference is the addition of Xfce and i3. When I booted into Xfce, it made me think of my Manjaro install.

The biggest change on the ArchMerge side of the scope. ArchMerge is positioned to be more than just an Arch-based distro. On the ArchMerge website, Eric has a series of phases planned out make ArchMerge a tool that people can use to learn about Linux. 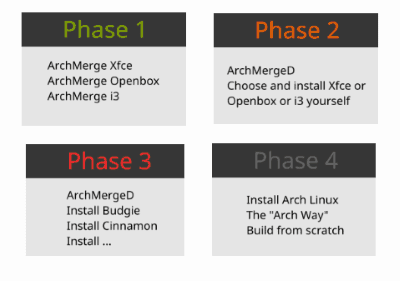 Besides the release of ArchMerge 6 (the numbering shows the relationship to the previous version of ArchLabs), Eric released a net installer ISO named ArchMergeD. Users will be able to use ArchMergeD as a foundation to build their custom Arch install.

Confusingly, Eric also announced the creation of a companion site named ArchMerged. This site is full of tutorials teaching users all aspects of ArchMerge specifically and Linux in general.

As someone looking at this from the outside, this parting of the ways appears to have been caused by a conflict between two strong personalities. Matt of ArchLabs had the goal of imitating Crunchbang with an Arch environment and I think he has succeeded in this goal.

On the other hand, we have Eric. First of all, I want to say that Eric has done quite a bit for the Linux community. He has a website full of tutorials about how to theme and customize your Linux distro. That being said, a couple of the things he had done rub me the wrong way or just don’t really make sense. First of all is the name confusion. ArchMerge is the full distro while ArchMergeD will be the cut-down version you can use to build your OS the way you want it. Also, the learning platform/website is named ArchMerged. I can see it getting confusing after a while. Also, Eric seems to be very interested in making sure everyone knows that ArchMerged is his baby. On both Twitter and Facebook, Eric has his picture overlaid on the ArchMere logo. It appears that he even trademarked the ArchMerge logo.

Of the two, I’d be more interested in using ArchLabs just because it is very similar to CrunchBang. ArchMerge is just too similar to Manjaro for me to use. I would probably make use of the tutorials on the ArchMerged.

Have you ever used AchLabs or ArchMerge? What is your favorite minimal Linux distro? Please let us know in the comments below.