Yes, official Ubuntu Forum got hacked. It seems that Canonical (parent company of Ubuntu) has fallen prey to obnoxious hackers this time. Ubuntu’s official forum ubuntuforums.org website has been hacked by a hacker named @Sputn1k_. Hacker defaced the website and displayed this page on the homepage: 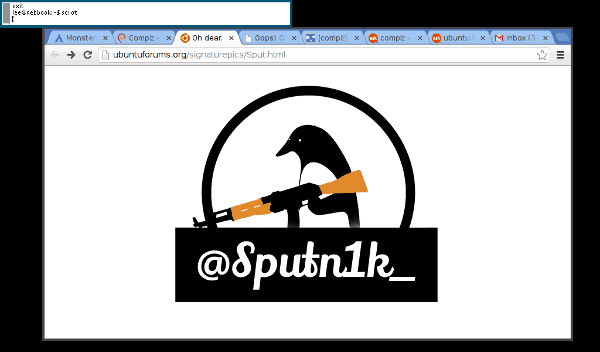 ubuntuforums.org website has been down for couple of hours now and users can not access it as I am writing this post. There is no official word from Ubuntu over this hack but they seem to be aware of the issue. Ubuntu community team member Jorge Castro acknowledged that Canonical is aware of the issue:

Canonical IS is aware and working on the problem.

There is no more information available at present. It cannot be made sure or if the hacker got access to the database and thus user credential. If hacker got access to users credential then Canonical will be the latest victim in the series of Sony, LinkedIn and some other big companies that got hacked recently. Even if it is a website defacement, it is still a (minor) embarrassment for Ubuntu.

Canonical acknowledged the security breach. They are re-directing the traffic of ubuntuforums.org homepage to an announcement page that displays the following message:

There has been a security breach on the Ubuntu Forums. The Canonical IS team is working hard as we speak to restore normal operations. If you’re using Ubuntu and need technical support please see the following page for support:

According to latest news, hackers have gotten every user’s username, password (NOT stored in plain text) and email address from Ubuntu Forum’s database. It is advised that if you use the same password on similar service (such as email), you better change the password as a precautionary message. Canonical has assured that other Canonical services such as Launchpad and Ubuntu One accounts are safe.

I’ll keep updating the article as more information arrives. Meanwhile you can read this article to know how to hack Ubuntu password and quench your hacking thirst :P