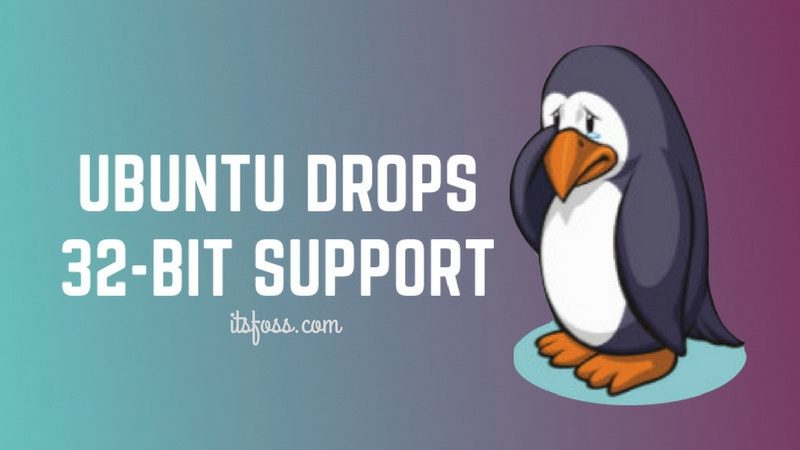 Remember I told you about Ubuntu considering to drop 32-bit support in March this year? It seems the decision has been finally made.

Ubuntu is officially dropping 32-bit builds of the Ubuntu 17.10 desktop.

Canonical’s Dimitri John Ledkov, who had proposed the removal of 32-Bit support in March, has instructed the Ubuntu release team to remove the Desktop i386 images.

Please action the below and remove Ubuntu Desktop i386 daily-live images from the release manifest for Beta and Final milestones of 17.10 and therefore do not ship ubuntu-desktop-i386.iso artifact for 17.10.

The main argument for dropping the 32-bit Ubuntu desktop build is that “there is no longer any effective QA or testing of the desktop product on actual i386 hardware”. Shrinking 32-bit userbase is the obvious driving factor here.

Wait! This is not the end of 32-Bit Ubuntu. At least not yet!

Before you jump to conclusions, let me make a few things clear. This is not the end of 32-bit Ubuntu entirely. At least not just yet.

The idea here is to drop the DESKTOP i386 images. The desktop image is what you get by default from Ubuntu’s website.

But there are other variants of the same image. There is net install that lets you install Ubuntu over a network. There is also a minimal install alternative with image size around 60 Mb and consists of only the Ubuntu base. This decision of dropping 32-bit support doesn’t impact these installs, yet.

Also, you can still upgrade your existing 32 bit install to the newer Ubuntu 17.10.

So ultimately, you won’t get the default Ubuntu 17.10 32-bit ISO from its website. You’ll have to resort to the minimal ISO and the net install. Both of these are not straightforward install and do not allow a live preview.

32-bit support will continue to fade away

Ubuntu is not the only one to show its unwillingness to support 32-bit. Manjaro Linux had dropped 32-bit support earlier along with Arch Linux. Newer Linux distributions like Nitrux and Antergos never had a 32-bit option.

On top of that, many application developers have also stopped support for 32-bit systems. Google Chrome is one such example. New Skype for Linux also doesn’t support 32-bit Linux.

Considering that the last 32-bit system was manufactured probably more than 10 years away, it is only natural that the support for older hardware goes away gradually. Which brings us to the burning question: are we looking at the end of 32-bit Linux?

While it may not come as surprise to everyone, I was taken aback by the news of Ubuntu dropping 32-bit desktop builds.

The reason is that I was at UbuCon Paris earlier this month. And there was a particular discussion about 32-bit support. Dustin Kirkland, VP of Product Development at Canonical, had specifically ensured that Ubuntu will continue 32-bit support at least till 2021.

He might not be wrong here because Canonical has not dropped the 32-bit Ubuntu support entirely. Ubuntu should be continuing the 32-bit support for existing LTS release but the same cannot be said about the upcoming releases.

Quite obviously, there won’t be more 32-bit support for the upcoming Ubuntu releases. It would be interesting to see how other Ubuntu flavors handle this. Considering that minimal install is still supporting the 32-bit support, I think that some Ubuntu flavors like Lubuntu and Xubuntu would continue providing 32-bit desktop ISO.