When people usually think of PC games, they think of big titles, like Call of Duty, which often cost millions of dollars to create. While those games may be enjoyable, there are many games created by amateur programmers that are just as fun.

I am going to review one such game that I love to play. It’s called SuperTux.

Today, we will take a look at SuperTux. According to the description on the project’s website, SuperTux “is a free classic 2D jump’n run sidescroller game in a style similar to the original Super Mario games covered under the GNU GPL.”

As you would expect from the title of the game, you play as Tux, the beloved penguin mascot of the Linux kernel. In the opening sequence, Tux is having a picnic with his girlfriend Penny. While Tux dances to some funky beats from the radio, an evil monster named Nolok appears and kidnaps Penny. It’s up to Tux to rescue her. (Currently, you are not able to rescue Penny because the game is not finished, but you can still have a lot of fun working your way through the levels.) 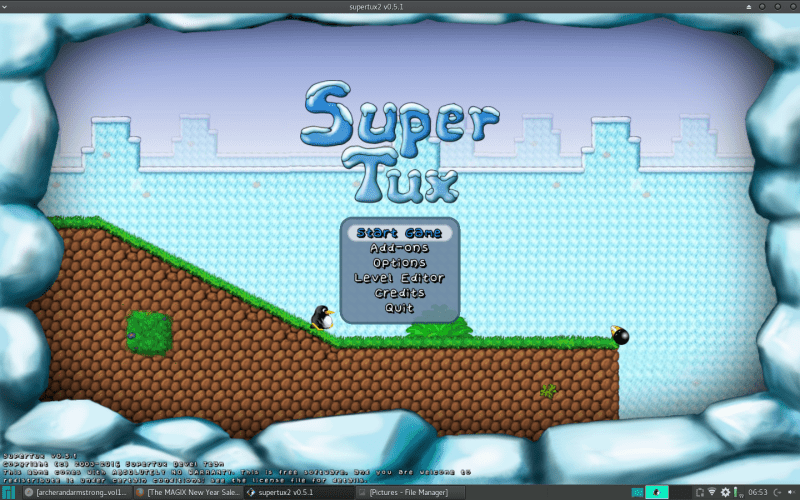 Playing SuperTux is very similar to Super Mario. You play through different levels to complete a world. Along the way, you are confronted by a whole slew of enemies. The most common enemies are Mr. and Mrs. Snowball, Mr. Iceblock and Mr. Bomb. The Snowballs are this game’s version of the Goombas from Super Mario. Mr. Iceblock is the Koopa Troopa of the game. You can defeat him by stomping on him, but if you stomp on him again he will fly across the level taking out other enemies. Be careful because on the way back he’ll hit Tux and take a life away. You jump on Mr. Bomb to stun him, but be sure to move on quickly because he will explode. You can find a list of more of Tux’s enemies here.

Just like in Super Mario, Tux can jump and hit special blocks to get stuff. Most of the time, these blocks contain coins. You can also find powerups, such as eggs, which will allow you to become BigTux. The other powerups include Fireflowers, Iceflowers, Airflowers, and Earthflowers. According to the SuperTux wiki:

Occasionally, you will see a bell. That is a checkpoint. If you touch it, you will respawn at that point when you die, instead of having to go back to the beginning. You are limited to three respawns at the checkpoint before you are sent to the beginning of the level.

You are not limited to the main Iceworld map that comes with the game. You can download several extra maps from the developers and the players. The game includes a map editor. 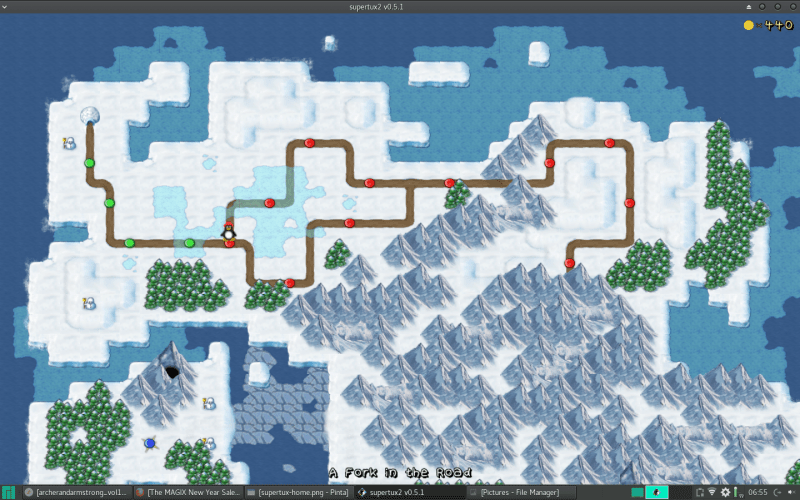 The most recent version of SuperTux is 0.5.1 and is available from the project’s website. Interestingly, you can download installers for Windows or Mac or the source code. They don’t have any Linux packages to download.

However, I’m pretty sure that SuperTux is in all the repos. I’ve never had trouble installing it on any distro I’ve tried.

I quite enjoyed playing SuperTux. I never played proper Mario, so I can’t really compare it. But, I think SuperTux does a good job of being its own creation.

Tux can move pretty quickly for a penguin. He also tends to slide if he changes direction too quickly. After all, he’s moving on ice.

If you want a simple platformer to keep your mind off your troubles for while, this is the game for you.

Have you ever played SuperTux? What is your favorite Tux-based or Linux game? Please let us know in the comments below. If you found this article interesting, please take a minute to share it on social media.