Oracle is Set to Kill Solaris. Here are the Alternatives to Solaris

In January 2017, Solaris 12 disappeared from the official Oracle roadmap.op

Even if Oracle denied it, preferring to claim they will move to “continuous delivery” instead of “point zero” upgrades, that raised a lot of question and rumors about the future of Solaris under the umbrella of the firm of Redwood Shores.

In September 2017, the decision of Oracle to laid off the core Solaris technical staff confirmed our worries concerning the future of the Sun inherited operating systems. So, is this the end of Solaris? Not necessary… 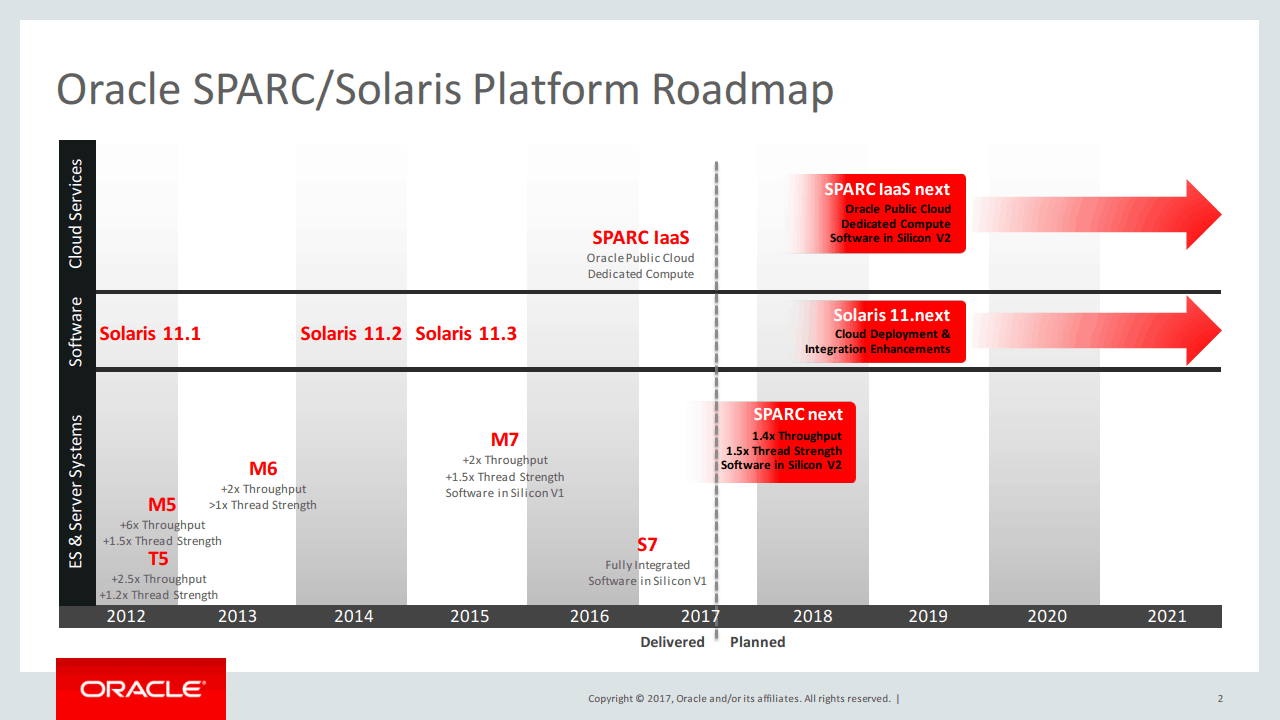 A quick look back at Solaris history

The younger readers among you may have only known Linux and eventually some *BSD Unix-like systems. But for people of my generation, Solaris –just like AIX— is another big name. A little bit of history might help you understand why this operating system has a special place in our hearts — and in our server racks.

It all started in 1982 when three and a half students of Stanford university founded Sun Microsystems. I said three and a half since Bill Joy is considered as a co-founder alongside Vinod Khosla, Andy Bechtolsheim, and Scott McNealy, even if the former joined the team only after few months. Sun aimed initially at being a hardware company, designing high-quality MC68000-based graphical workstations.

But with the arrival of Bill Joy, a core BSD developer (and the original vi writer— yeah!), all was ready for Sun to become a leader in the software industry too. It was notably the case with the development of SunOS, the BSD-based operating system powering the commercially successful Sun SPARC servers and workstations.

SunOS rapidly gained a reputation for quality and innovation, introducing technologies and concepts several years ahead of their competitors like NFS (the Network File System, whose version 3 and 4 are still in use today), NIS+ (an alternative/predecessor of LDAP), Sun RPC (formally Open Network Computing Remote Procedure Call or SunView (a windowing system developed in the early 80s that were superseded by X10/X11 based products only several years later)

But the real birth of Solaris dates back to the 90s, after AT&T entered in the Sun Microsystems capital, and the OS switched from BSD base code to the (then newly) AT&T System V release 4. With that change, SunOS was rebranded Solaris.

During almost 20 years, from 1992 to 2010, Sun provided regular release of its OS, initially for its SPARC architecture, then for SPARC, UltraSPARC, x86 and finally x86_64. Each release providing its share of new technologies — some of them you may know because of their later port to other OSes like Linux: CacheFS, Doors), ZFS, DTrace, IPMP, Solaris Multiplexed I/O, or –pay special attention systemd haters– modern init replacement with SMF. Not mentioning the development of the Oak programming language since 1991 … and released in 1995 under the name Java because of trademark issues.

The 90s decade was rich in term of innovations, and during that period, Sun Microsystems had solid and constantly increasing incomes. Unfortunately, a large share of those incomes was the result of the “dot-com bubble”. And when the bubble burst, Sun faced a demand shortage and consequently important financial losses.

In an attempt to switch to a different model, in 2005 Sun launched the OpenSolaris project. For the first time in its history, the sources of the upcoming Solaris 10 would be available. While acclaimed by the community, observers predicted that move was too late given the predominant position already occupied by Linux at that time.

And indeed, they were right: only five years later, in 2010 Sun was finally bought by one of its competitors: Oracle Corporation. Rapidly, Oracle abandoned the OpenSolaris project and resumed Solaris development using a closed source model. That leads to the release of Solaris 11.0 to 11.3 from 2011 to 2015.

Is Solaris a legacy software?

Probably there is a share of nostalgia in our (my?) attachment to Solaris. But Solaris remains a robust, secure and scalable operating system. Particularly well suited for cloud computing infrastructure given its strong and native support for virtualization (Solaris zones, including branded zones), software defined network (Crossbow), real-time monitoring (DTrace) and fault tolerance (Solaris Fault Management, SMF). Worth mentioning many of these technologies were actually developed for Solaris 10 — so were an integral part of the OpenSolaris project. 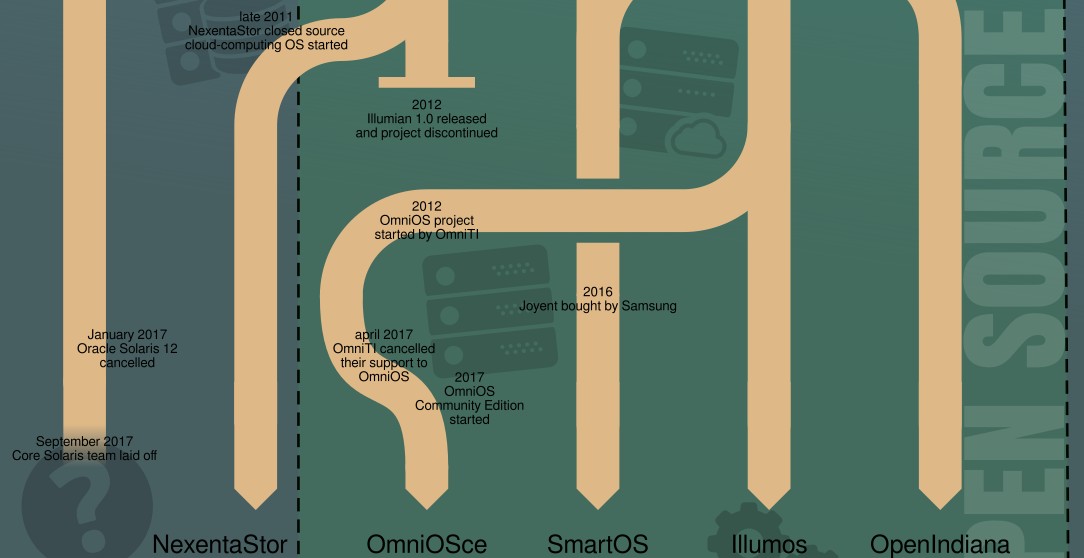 During the writing of this article, I started drawing infographics you can download from my website to summarize the long and complex history of Solaris. Anyway, after several twists and forks, Solaris has given birth to a few projects. Let’s have a look at them:

Operating Systems based on Solaris

If today the plans of Oracle for Solaris remains nebulous, hopefully, the ephemeral OpenSolaris project opened the door for a life for Solaris-based projects outside of the Sun/Oracle umbrella.

A corner stone of that “free” Solaris ecosystem is illumos. The illumos project is an open and independent successor of OpenSolaris, whose main goal is to continue the development of OS/Net, that is the Solaris kernel, the base libraries, and the core userland tools. Today, the illumos implementation of OS/Net is known as the illumos-gate project. And the core userland utilities port is part of the illumos-userland project.

illumos is not a distribution per-se, but serves as a base for most if not all non-Oracle Solaris distributions. The best known of them being OpenIndiana.

OpenIndiana was announced in 2010 after Oracle has discontinued the support for open-source development around Solaris. While initially based on OpenSolaris, the project switched to illumos OS/Net implementation one year later.

Today, OpneIndiana is the de-facto standard for illumos-based general purposes distributions. OpenIndiana is actively maintained and is suitable both for server and desktop usage. For that latter use case, while other projects exist, OpenIndiana is clearly the most successful.

If you’re looking for a GUI version of Solaris, or if you come from a Linux background and want to try out Solaris in a familiar and rather comfortable environment, OpenIndiana is certainly for you.

OmniOS Community Edition is the continuation of the OmniOS project originally supported by OmniTI. The goal of OmniOS is to provide an “illumos based server OS with ZFS, DTrace, Crossbow, SMF, KVM, and Linux zone support”.

While OpenIndiana is a general purpose distribution that you can use for server applications, OmniOSce is specifically designed for that purpose. The project is actively developed and aims at delivering a stable release every six months, and the long term support distribution every two years. The latest LTS version at the time of this writing is OmniOSce r151022 — whose supports should continue until 2020 (http://www.omniosce.org/schedule.html).

If you’re looking for a Solaris distribution for your server, OmniOSce is the place to start.

Linux is well-known and used by a wide variety of users with many different needs. On the other hand, Solaris appears more confidential and was confined in high-end applications and niche markets. And with the release of the sources as part of the OpenSolaris project, some companies have started to develop very specialized distributions tailored for their operational needs.

This is the case with SmartOS. As the opposite of previous distributions, this one is a “Live” distribution in that sense it runs entirely on RAM. You boot on SmartOS from a USB device, from an ISO image, or –probably your choice in production– over the network via PXE.

The goal of SmartOS is to provide a complete virtualization environment using zones for containers (including bare-metal performances for Linux application in LX zones) and KVM for running arbitrary OS. In some sense, SmartOS is an hypervisor rather than an OS. SmartOS is a free and open-source project developed by and for Joyent (recently bought by Samsung) and used on their own cloud infrastructure.

Being build for cloud applications, SmartOS might seem confusing if you don’t have a previous experience in virtualized environments or server administration. But if you’re looking for a free alternative to VMware ESXi, SmartOS is certainly the illumos distribution to consider.

Given it runs entirely from RAM, SmartOS is suitable as the embedded OS on appliances or smart devices. But if you need an illumos-based distribution specifically designed for that purpose, take a look at NexentaStor.

Worth mentioning, as the opposite of the previous solutions, NexentaStor is no longer open source. As its name implies, it is specifically well suited for storage devices and appliances (NAS, SAN, iSCSI or Fibre Channel applications).

There used to be a NexentaStor Community Edition, but from what I saw, this project is more or less canceled and if you login on the Nexenta website and try to download NexentaStor 5.x CE, you end up having to request a license for the “free version for up to 10TB of allocated disk space”. So it looks more like a trial version than a community edition to me. Or am I wrong? Don’t hesitate to use the comment section below if you have more information on that topic!

A reason to mention NexentaStor here is Nexenta Systems alongside with Joyent were very active members of the illumos community. Being at the core of many improvements and features we can use today on any illumos-based distributions.

The few project mentioned above are clearly the “big names” of the illumos ecosystem today. But besides them, they are countless lesser known projects that ensure Solaris remains alive — and that actually play a significant role in the IT landscape.

For example, I can mention MenloStor from MenloWare, that leverages the power of ZFS and software defined network capabilities of illumos to provide advanced storage solutions.

Or napp-it which targets a similar market and you can use for free at home or in SOHO environment. During my researches for this article, I was told about Delphix OS too — especially well suited apparently for database storage and backup. But I must admit I didn’t review this one in details. Finally, besides industry-supported distributions, there are a couple of lesser known projects like Tribblix — which aims at providing a lightweight and accessible desktop and server distribution that can run anywhere, including on SPARC and 32bit x86 (IA-32) hardware with limited resources. And there are probably many other great projects I forgot in that list!

I wish to thank Peter Tribble (author of Tribblix), Theo Schlossnagle, Jim Klimov and all other people on the OmniOS mailing list for their help during the writing of this article. And more generally, thanks to the whole illumos community for your great work!

So, is Solaris dead? Well, the Solaris brand maybe. But the Solaris spirit and its unique combination of innovative features are still alive. And well alive.

I can only encourage you to try one or the other illumos distributions mentioned above: at the very least, you will discover something different. And who knows? Maybe you could realize that Solaris was the OS you were looking for. As of myself, I’m really looking forward to reading your feedbacks about Solaris/illumos in the comment section below!