Tar Vs Zip Vs Gz : Difference And Efficiency

While downloading files, it is not uncommon to see the .tar,  .zip or .gz extensions. But do you know the difference between Tar and Zip and Gz? Why we use them and which is more efficient, tar or zip or gz?

Difference between tar, zip and gz

If you are in hurry or just want to get something easy to remember, here is the difference between zip and tar and gz: 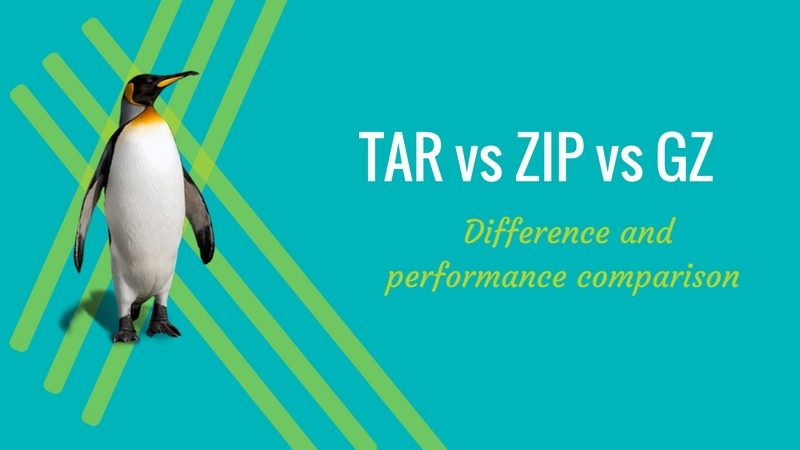 A little bit of history of archive files

Like many things about Unix & Unix-like systems, the story starts a long long time ago, in a not so distant galaxy called the seventies. In some cold morning of January 1979, the tar utility made its appearance as part of the newly released Unix V7.

The tar utility was designed as a way to efficiently write many files on tapes. Even if nowadays tape drives are unknown to the vast majority of individual Linux users, tarballs — the nickname of tar archives — are still commonly used to package several files or even entire directory tree (or even forests) into a single file.

One key thing to remember is a plain tar file is just an archive whose data are not compressed. In other words, if you tar 100 files of 50kB, you will end up with an archive whose size will be around 5000kB. The only gain you can expect using tar alone would be by avoiding the space wasted by the file system as most of them allocate space at some granularity (for example, on my system, a one byte long file uses 4kB of  disk space, 1000 of them will use 4MB but the corresponding tar archive “only” 1MB).

Creating archives is nice. But as time passed, and with the advent of the personal computer era, people realized they could make huge savings on storage by compressing data. So a decade after the introduction or tar,  zip came out in the MS-DOS world as an archive format supporting compression. The most common compression scheme for zip is deflate which itself is an implementation of the LZ77 algorithm. But being developed commercially by PKWARE, the zip format has suffered from patent encumbering for years.

So, in parallel, gzip was created to implement the LZ77 algorithm in a free software without breaking any PKWARE patent.

A key element of the Unix philosophy being “Do One Thing and Do It Well“, gzip was designed to only compress files. So, in order to create a compressed archive, you have first to create an archive using the tar utility for example. And after that, you will compress that archive. This is a .tar.gz file (sometimes abbreviated as .tgz to add again to that confusion — and to comply with the long forgotten 8.3 MS-DOS file name limitations).

Today you can freely use any archive file format both on Linux & Windows.

But as the zip format is natively supported on Windows, this one is especially present in cross-platform environments. You can even find the zip file format in unexpected places. For example, that file format was retained by Sun for JAR archives used to distribute compiled Java applications. Or for OpenDocument files(.odf, .odp …) used by LibreOffice or other office suites. All those files formats are zip archives in a disguise. If you’re curious, don’t hesitate to unzip one of them to see what’s inside:

All that being said, in the Unix-like world, I would still favor tar archive type because the zip file format does not support all the Unix file system metadata reliably. For some concrete explanations of that last statement, you must know the ZIP file format only defines a small set of mandatory file attributes to store for each entry: filename, modification date, permissions. Beyond those basic attributes, an archiver may store additional metadata in the so-called extra field of the ZIP header. But, as extra fields are implementation-defined, there are no guarantees even for compliant archivers to store or retrieve the same set of metadata. Let’s check that on a sample archive:

Whereas we cannot reject tradition as a motivation for still using tarballs, with this little example, you understand why there is still some (corner?) cases where tar cannot be replaced by zip. This is especially true when you want to preserve all standard file metadata.

I will talk here about space efficiency, not time efficiency — but as a rule of thumb, more potentially efficient is a compression algorithm, more CPU it requires.

And to give you an idea of the compression ratio obtained using different algorithms, I’ve gathered on my hard drive about 100MB of files from popular file formats. Here are the result obtained on my Debian Stretch system (all size as reported by du -sh): 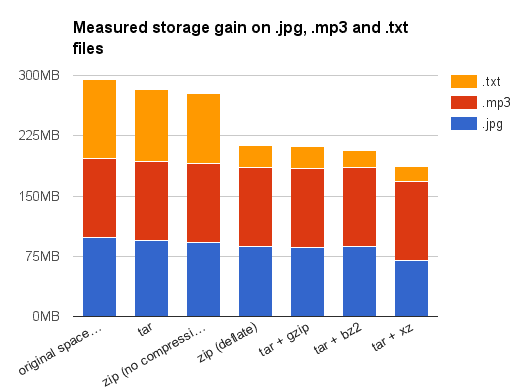 First, I encourage you to take those results with a huge grain of salt: the data files were actually files hanging around on my hard drive, and I wouldn’t claim them to be representative in any way. Then, I must confess I didn’t choose those file types randomly. I’ve said it already, .odt files are already zip files. So the modest gain obtained by compressing them a second time isn’t surprising (except for bzip2 or xy, but I would consider that as a statistical abnormality caused by the low heterogeneity of my data files — containing several backups or working versions of the same documents).

For all those reasons, it was expected that compressing JPEG images or MP3/MP4 files will not leave to high gains. Please notice as a typical file contains both the highly compressed data and some uncompressed metadata, we can still gain a little something there. This explains why I still have a noticeable gain for JPEG images as I had many of them — so the overall metadata size wasn’t that negligible compared to the total file size. Once again, the surprising results when compressing MP4 files using xz are probably related to the high similarities between the various MP4 files used during my tests. Or aren’t they?

To eventually lift those doubts, I strongly encourage you to make your own comparisons. And don’t hesitate to share your observations with us using the comment section below!